Ana Marcela Cunha vs. Angela Maurer In A FINA Climax 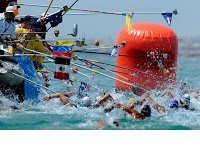 The 2010 FINA 10KM Marathon Swimming World Cup series will culminate tomorrow in Fujairah in the UAE – and the races should be outstanding. In one corner is the series leader Olympian Ana Marcela Cunha of Brazil (106 points in the season). In the other corner is fast-approaching Olympian Angela Maurer of Germany (96 points). The winner of the 2010 series will come down to exactly where they place in the series finale.

However, Eva Fabian and Christine Jennings, both from the United States, have their own aims to reach the top of podium.

“This year’s FINA World Cup and the Open Water Swimming Grand Prix have received the most number of entries from around the globe in the history of this competition,” Competition Director Aymad Sa’ad told the Gulf News. “We are thrilled with this trust placed in the UAE by some of the best long-distance swimmers in the world. All arrangements are in place and we can hope for a truly memorable two races on Saturday (World Cup) and Wednesday (Grand Prix).“

More than 90 swimmers are entered in the races with 55 men and 27 women in tomorrow’s 10K.

The men’s race, which starts five minutes before the women on the same course, should be equalling exciting with overall World Cup series leader Chad Ho (112 points) trying to hold off veteran Fran Crippen (94 points) and a slew of other hardened men including multi-time world champion Thomas Lurz.