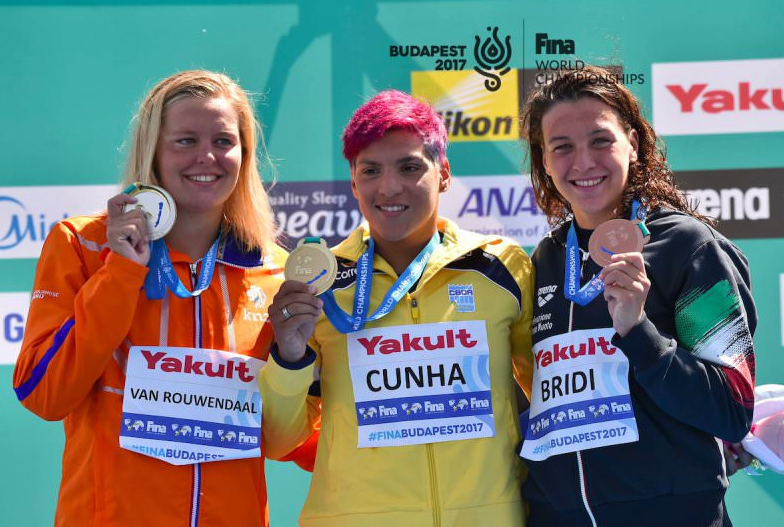 With her victory today in the 25 km marathon swim in Lake Balaton, the 25-year-old has now been on the FINA World Championship podium nine separate times from the quick 5 km races to the long 25 km marathons.

Each of those races, from the 5 km and 5 km team event to the 10 km and 25 km races require different strategies, pacing, feeding, and mentality. But Cunha has mastered all of those distances against the world’s fastest swimmers.

Cunha beat 2016 Olympic champion Sharon van Rouwendaal by 2.4 seconds and another emerging star in the 5 hour 21 minute race. Another emerging star Arianna Bridi Italy was the only other swimmer who was close to Cunha who was in no rush to win until the end.

During the first nearly 90 minutes of the marathon, Cunha has literally last in the pack of 21 swimmers. As the third hour of the race came up, she was still 17th although within easy striking distance of the leaders. But she gradually made her way up the pack, After the third hour, Cunha was 16th. After 30 minutes passed, she had edged up to 10th. By the fourth hour, she was in third only 12 seconds behind Van Rouwendaal as the top three started to open up a gap. By the fifth hour, the podium finishers had clearly separated themselves in a three-way chess match in the water.

Van Rouwendaal recalled her strategy, “I was really relaxed at the beginning. I was waiting for the moment when the men were coming, then I tried to lead the women’s pack. There was 8 km left and I was ready to sprint and pacing. And when we arrived to the 21st km, I thought I would try to continue at this pace. I felt that I should get a medal. I didn’t think about the weather conditions I just concentrated on my race.”

Cunha finally pulled into the lead over Bridi and Van Rouwendaal with only 250 meters to go and won her 9th career FINA World Championship medal.

Cunha informed the media that she now trains under coach Fernando Possenti. Possenti was her coach for a few years back in 2013, but they renewed their training program eight weeks ago. “Patience is the most important thing during the long distance, since we pass many hours in the water. Fortunately, I managed to swim behind the leading pack, that was my plan. I knew that the arrival of the men’s pack would be the key factor, so who could follow them those would be in a better position. I didn’t care for the hot weather, because during swimming I just concentrated on myself as usual.”

Bridi finished her successful week with her second bronze medal performance, the first being a tie with Cunha in the 10 km who won 2 bronze medals to add to her gold. “It had to fight very hard to claim the third place. This was my third 25 km and this is my best result at the event. The weather was too hot for me today. I hate warm water because it takes away too much energy, but I just tried to focus on my race.”