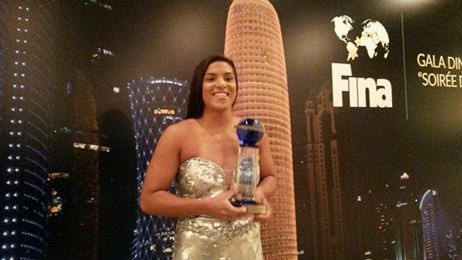 This was her second time to win the award after her first honor in 2010. During the 2014 FINA 10K Marathon Swimming World Cup season, she was never out of the top three during the 8-race professional marathon swimming circuit. She also won the 36 km Capri-Napoli marathon in Italy where she set the record in 6 hours 24 minutes.

“It was a long year of hard work, dedication and endless hours of training. But here, at the end of the year and be honored by an award like this makes it all worthwhile. It was a spectacular season. We are focused on our big goal at Kazan next year that will lead us to the Rio Olympics in 2016.”

Ana Marcela was elected by members of the FINA Bureau, FINA technical committees and its member federations, members of the press and selected individuals who were part of the voting panel.

She is also nominated for the 2014 World Open Water Swimming Woman of the Year. Her nomination reads, “Ana Marcela Cunha was consistently competitive throughout the year in all corners of the world. She is tenaciously tough in myriad conditions, warm and cold, rough and calm, fresh and salt. She is always spectacularly speedy down the finish against the world’s fastest swimmers. The world champion competes with a broad smile on her face and a deep appreciation in her heart. With a deep-seated pride to represent her native Brazil well, she joyfully does local and won her third FINA 10K Marathon Swimming World Cup series title by swimming 8 pro marathons around the world from January to October. She garnered 5 victories in a row from Portugal to China and always finished on the podium. Air miles, jet lag, time zone differences: none played a role in slowing the Olympian down. For her boundless joy in traveling around the world to race all-comers, for her repeated victories against the world’s best, for her constant smile before and after races, Ana Marcela Cunha is a worthy nominee for the 2014 World Open Water Swimming Woman of the Year.“