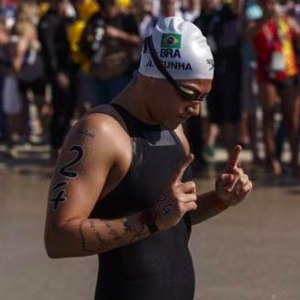 Kate Sanderson of Canadian placed sixth and described the race in Peru among 20 women, “At the sixth lap, the pack broke apart and the elite people started to go ahead. From there, it was sprint as fast as you can for the the last three laps. I just told myself to keep going and try to catch up to as many people as possible.”

9th-place Chantel Jeffrey, also of Canada, described the race from her perspective, “The hardest part is when the pace picks up because it is always tricky who you want to follow. I wanted to apply what I learned from world championships in this race as well. It’s really good for me going into next year because I have all this experience. I feel like with open water the more you race, the more you learn.”

Their coach Mark Perry said, “They both had race plans and they executed them well. Finishing in the top 8 was the target and we were right there. Every race is a learning opportunity, and each race is different. It’s good to come here and face some of the best in the world.”