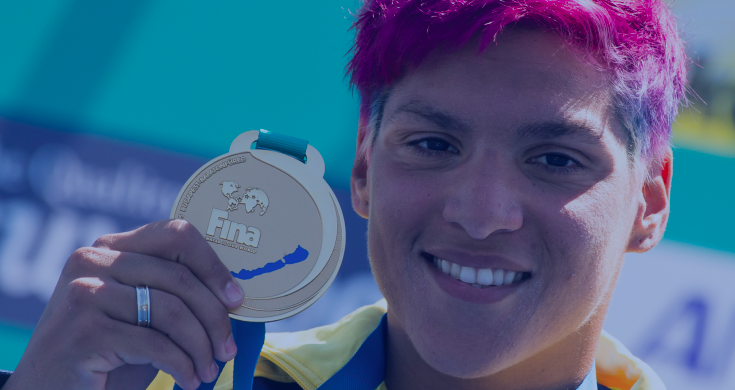 At the 2017 FINA World Aquatics Gala Soirée des Etoiles, Ana Marcela Cunha of Brazil was announced as the 2017 FINA Best Female Open Water Swimmer of the Year for the fourth time in the eight years of the award.

Her coach Fernando Possenti was selected as the FINA Open Water Coach of the Year.

Her comeback from spleen surgery and disappointment from 2016 Rio Olympics was dramatic and typical of her inherent toughness and competitiveness.

Over the course of 2017, she won her third 25 km world championship title and two bronze medals in the 5 km and 10 km races at the FINA World Championships in Lake Balaton, Hungary. On the FINA 10K Marathon Swimming World Cup circuit, she won legs in the Traversée internationale du lac Mégantic and in China’s Chun’an as well as two silver medals in Traversée international du lac St-Jean and at the World Cup race in Hong Kong.

FINA posted an article about her lifestyle and training regimen here.

In addition to her recognition by FINA, the personable Brazilian was nominated for the 2017 World Open Water Swimming Woman of the Year. Her fellow nominees include the following individuals:

For winning gold in the 25 km race and bronze in the 5 km and 10 km races in the world championships, for coming back from having her spleen removed in an early-season surgery to finish second overall in the 2017 FINA/HOSA 10K Marathon Swimming World Cup circuit, for her constant smile and affable spirit despite long flights, tough conditions and blistering fast races, Ana Marcela Cunha is a worthy nominee for the 2017 World Open Water Swimming Woman of the Year.