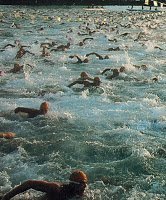 EverymanTri proposed split times for for this Dream Team relay to break the 7-hour mark at the Ironman World Championships, assuming that Michael completes the 2.4-mile swim leg in 45 minutes, Lance completes the 112-mile bike course in 4 hours and Ryan runs the marathon in 2:15.

While Lance and Ryan may hold up their end of the bargain, we are not sure that Michael could go two minutes faster than the top triathlon swimmers who were very fast pool swimmers in their competitive pool swimming prime without some help:

Michael, history’s greatest swimmer, has tremendous turns in the pool where he blasts off the wall at a top instantaneous velocity of over 3.3 meters per second and quickly streamlines underwater for up to 15 meters, essentially making every 50-meter lap into a 35-meter sprint. In the gently rolling ebb and flow along the Kona coast, Michael would not benefit from one of his greatest aquatic advantages.

Additionally, Michael, who moves powerfully through the water with a finely-tuned symmetrical freestyle, could probably navigate his way along the Ironman course well enough, but the lack of lanes, lines and walls always throws off even the most accomplished pool swimmers – and especially in a course that runs parallel to the twisting curvature of the Kona coast.

While Michael has the athletic ability to become the fastest open water swimmer in history, we also believe he would have to practice this discipline before swimming two minutes faster than anyone else ever has in the Ironman swim leg. While Michael hates to lose, competing in the dynamic environment of the open ocean throws a different element to his winning equation.

Fortunately, this future possibility is not out of the question. The sport of open water swimming has seen numerous Olympic gold medalists in the pool – including Jim Montgomery, John Kinsella, Shane Gould, Sandy Neilson-Bell and Brooke Bennett – take to the open water after the days of pool glory ended. However, Michael may need some convincing and prodding to get him in the open water. He has spoken about open water swimming before: here and here.

But if he is so motivated, we believe Michael would need help to do a 45-minute 2.4-mile Ironman swim leg – besides having the benefit of glassy smooth conditions. Ideally, his help could come by efficiently drafting off of an of very fast open water swimmer for the first half of the race and then negative-splitting the rest of the swim leg himself while using the officials’ boats as navigational aides. An ideal partner would be multi-time 5K world open water champion Thomas Lurz who is not only a world-class 1500-meter swimmer, but also someone with a well-developed open water navigational IQ.

Michael will be on the shoreline at the 2010 Pan Pacific Swimming Championships 10K race in Marine Stadium in Long Beach, California cheering on his American open water swimming teammates this August, so he may get a taste of the sport soon enough.

As EverymanTri suggested, it would definitely be very cool to see such a relay.