Around The Island With Jason Malick 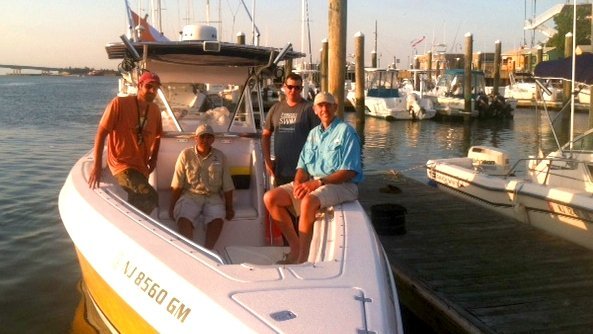 Jason Malick swam around Absecon Island as a throwback to the Around the Island Swim that was pioneered in 1953 by a friendly bet between two lifeguards.

Captain Stewart Rosen of the Metamorphisis and kayaker Jeff Wildonger left Gardner’s Basin as Malick rode the ebb tide out into the Atlantic Ocean passing by the grand strand of Atlantic City. The casinos were lit up as a spectacular back drop to an otherwise hazy summer night.

Malick made it halfway along the coast in two hours before the tides got funky. he made slow progress to Longport Inlet over the next 3-4 hours. Along the way many dolphins and cow nose rays came out to join him. Once inside the Longport Inlet, he felt the effects of the flood until reaching Miracle Mile as an easterly wind drove counter-currents until Dorset Bridge. From there, hee proceeded around the island, finishing at Gardner’s Basin in 14 hours 6 minutes against a flood tide.

“My hat goes off to the pros like Shelley Taylor Smith and Dimitar Petrov who completed this swim in nearly half the time. I was fortunate to have a strong crew to help push me along on this 22.5-mile journey filled with many doubts, trials, and tribulations.