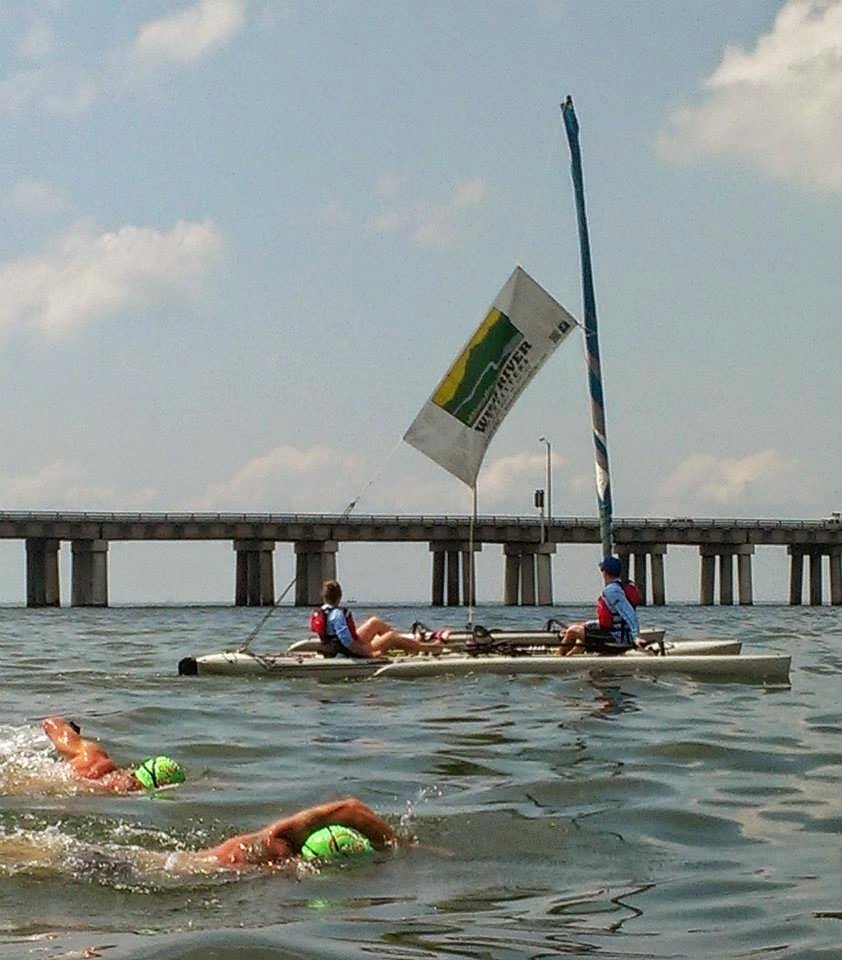 Courtesy of Anders Jakobsson on his Chesapeake Bay Crossing where he swam 26.4 km (16.4 miles) in 11 hours 28 minutes from Fisherman’s Island to Chic’s Beach in Virginia Beach, Virginia on September 3rd 2014..

Crossing the Chesapeake Bay has been a long-head goal by Anders Jakobsson, a swimmer from Västerås, Sweden who currently lives in Virginia Beach, Virginia.

Jakobsson talks about his journey and destination.

“During the course of the last year, I have been most focused on this task. The longest week of training was 22 miles in the water [where] I had many swim buddies, but I would like to point out Daniel and John.

One of the first things I had to figure out was when and how do I feed? Tim was a very good help in advising me how to mix my food and drinks.

Some of the pool workouts that I did were 5,000 meter swims that became a daily routine before work [at the end of my preparation]. I did one 10,000m swim in a 25-yard pool that was a bit out there, track workouts, 8 x 800-yard sets in the pool, and my favorite of 100 + 200 + 300 and the way up to 1400 yards [a total of 10,500 yards]. Sometimes Dai and I would do deep open water swims where we just took the kayak and headed straight out from his house. But most of my open water swims were solo when I swam parallel to the beach.

We also did some dark deep open water swims. This is when me and Dai left the beach at 4:30 am and headed straight out. The first time we tried it was on a cloud-free morning with an almost full moon. After I got my nerves and breathing under control, it was kind of peaceful. I could not see anything in the water except for the small bubbles coming of my arms. One thing I learned during these swims was that I could not determined distance whatsoever. So when I was heading back to shore I just had to keep swimming until I scooped up sand with my hands. None of these swims had anything to do with training, but they had everything to do with my head.

I believe in taking care of my body so I also had regular checks and adjustments by my chiropractor, Dr. Jarrett.

Another thing I did was to read Lynne Cox‘s book Swimming to Antarctica again. That was probably the best thing I could do. There are several things I used in that book to be able to complete this swim.

[In preparation,] Dai, Tim and I had a navigation meeting. I left all the navigations up to Tim to make sure that we went the right course. One thing that I was concerned about was how is my body going to react to not touching a solid object for 8-12 hours?

We met at Willoughby Marina at noon with Tim and his boat. It was Dai, Meredith, Paul and me who were going over with Tim. The other kayakers from Wild River Outfitters were going to drive up overnight and meet us at the start.

We got our gear onboard and put away. It was a smooth ride over and we had to use the motor since there was no wind at all and the ocean was flat as a pancake. It took about 5 hours to get to where I was supposed to start the next day. We wanted to get a GPS fix on it since it was going to be dark when I jumped the next day. After that, we motored up to our harbor and laid anchor for the night.

After dinner and some stories, it was lights out at 10 pm. Everything was nice and quiet for a few hours. Around midnight, I got thrown out of my bunk since a freak storm that we never saw came in and winds increased to about 26 knots with 5-foot waves. That did not look good for a 5 am start. I tried to go and get some sleep for the remainder of the night, but there was not much luck. We decided to push the launch back to 10 am and were hoping the winds would work with us.

We left the harbor around 8:30 am. It was still rough out there, but we had to give it a try at least. We meet up with the rest of the kayakers and headed to the other side of the bridge. As soon as we got over to the Atlantic Ocean side, the waves got a lot better. I was hungry to start. Michael and Sarah escorted me a shore. I jumped off the kayak and walked up the beach. I grabbed a hand full of sand and rubbed it in between my hands thinking, ‘Well it’s going to be a while before I get to feel this again.’

I raised my arm up so my crew could see the start. I started to swim and concentrated on my stroke and my breathing one stroke at a time.

I have faced questions of what I think about when I swim this far. It’s very hard to explain. I think of my strokes, breathing and body position in the water. Then I go to a special place in my brain that I just can’t explain. Now if something happened or I get very tired, one trick I use is trying to solve math problems. Take a random 3-digit number and divide that with say 7. For example, 387/7 and then try to figure it out.

For the first 3 hours of the swim everything went just as planned. We had to change the feeding schedule from every 40 minutes to every 25 minutes just to keep up with my nutrition. Paul did a very good job on shuttling food and drinks from the sail boat to the kayakers. I started to lose concentration and drift to my right behind Michael and Sarah’s kayaks. So they did a crew swap where Meredith could keep a closer eye on me. At 3 hours 15 minutes, we were halfway across. I felt really good.

We kept pushing on and what I didn’t know at the time that the tides were pushing me hard to the west, back to the bridge. About 6 hours in, it did get a bit hairy. I suddenly found myself in between a few fishing boats. Big, sharp, shiny hooks with half-dead fish getting pulled through the water where I was swimming got me a bit scared. However what I didn’t know at the time was that Tim had been working on the radio very hard to get the boats out of the way. But it seemed like it only attracted more boats around me. So I simply asked David to box me in and stay close to me. However, a few minutes later all the boats were gone and I just kept going.

The seas started to get choppy again and I just dug in. I saw something about the size of a toilet seat go past me underneath. Then a few more, but they were moving in a different direction than I was so it took me a while to figure out what they were. It was a school of stingrays swimming just below my fingers. They went away as suddenly as they appeared. About 20 minutes later, they were all around me and I started to laugh very hard. The next thing that showed up was a pod of dolphins that probably was just trying to figure out what I was doing so far away from land. It did feel very good that for even a few minutes I was not alone in the water.

I kept on swimming and we were getting closer to the last shipping lane. That’s when I was told to hold up. A BIG cargo ship was approaching very fast and he was not about to stop. For a few minutes I was thinking that I could make it across before he got to me. I’m glad that I didn’t try.

Dai told me to just do some laps in front of the sailboat. I’m in the ocean and I have to do laps! I thought I was done with that a few months ago when I stopped swimming in the pool. So I did. I also had an extra feeding before it was game on. The problem was that I drifted half a mile in the wrong direction during this time.

It’s about a mile and a half from the beginning of the first island to the end of the second island of the shipping lane and I normally cover that in about 40 minutes. That did not happened this time. The tides were really hard on me and I swam for almost 2 hours without moving. That first island was on my right side the whole time and I started to get very aggravated. However, Michael and Meredith were very helpful during this part of the swim to get me motivated. I finally got across to get into the home stretch.

Over the last 3 hours there were some issues with my own body. One of the first things that happened when the sun was setting was I started to lose my vision. I can’t explain why or how, but I could only see a few feet. Michael kept asking me if I could see the sail boat and I could not. I also do not have much memory of this last part of the journey.

In the home stretch, I found myself looking for the shore too much. I was very cold and just wanted this to be over. So I did go back to some tricks that I learned from Lynne Cox’s book. The first one was to increase my stroke count so that I could generate some more heat. I also found something on the bridge that I could aim at and then I did 1000 strokes before looking. If I felt that I hadn’t got any closer, I did a 1500-stroke session. Slowly, I got closer and closer.

I couldn’t make out where on the shore I was supposed to land, but that was not my problem. One of the most memorable things during this journey happened the last 500 yards. But it took me 2 days before I figured out who it was. Michael was on my right side during this whole trip and never left my side. But now I had some guy on the left of me that was talking to me and I could not figure out who it was. It was Dai, my team leader riding the kayak to shore.

Very simple: I don’t remember it all except for 2 things. Betsy and my dog were on the beach and there was a bunch of people there to greet me. Denise and Dai got me dried and put a sweater on me. Who was there I don’t not remember.

What I have been told in the aftermath is that Meredith and Jan did help me back to Jan’s apartment and put me in the bathtub to warm up. After they got me a little better, I got some fresh cloths on and started to feel almost human again. With some food in my stomach and some rest, I thought I was going to sleep good tonight.

My total swim distance was 16.8 miles with a total time of 11 hours 28 minutes, although I was estimating a sub 8-hour swim. But that is what the current can do to you when you miss your window. Why did I do this? It was a test run for my future swims.

One of the most important things I learned on this journey is to do something like this is one thing: your team.” 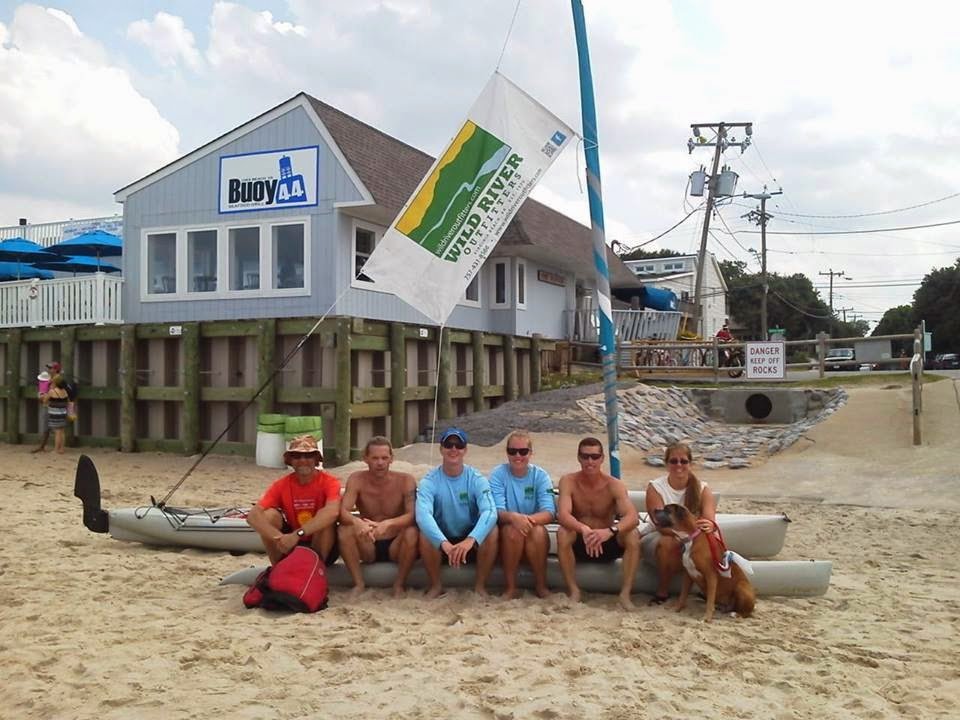