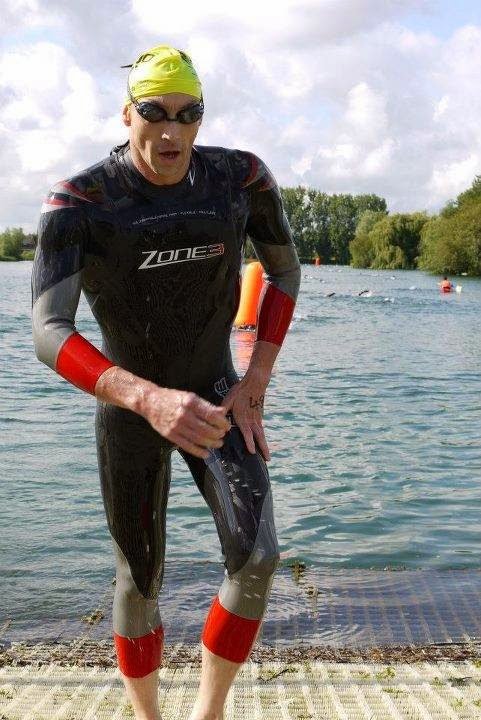 40-year-old Andrew Chamberlain, a former high-ranking British competitive swimmer and world #1 ranked distance freestyle masters swimmer took up open water and may be headed to the English Channel this summer.

His transition from a competitive pool swimmer to a sea swimmer is illustrative of many age group swimmers who take up open water swimming in their adult years.

He achieved the United Kingdom national standards throughout his younger days, ultimately qualifying for the senior national B finals as a teenager. But then he hung up his Speedos. “I gave up swimming at the age of 20, then returned to masters swimming about 10 years ago for fun.

After the 2010 World Masters, I had to stop training, but then my massive weight gain caused health issues. I have been training again since January 2012, but this time not with a club
.”

With a newly found drive and the ability to determine his own training sessions, Chamberlain went on a tear and began to set all kinds of new British masters swimming records in 2013. He set 7 new individual masters records, although one has been since broken, in the 40-44 year age group and culminated his season with two victories at the 2013 European Masters Swimming Championships in the 400m and 800m free. “Topping the FINA rankings for 3 short course events (400m, 800m, and 1500m free) is the icing on the cake.”

His journey from the chlorine to the fresh water began in 2012. “As part of my training and weight loss, [swimming in the open water] gives me a different buzz to pool swimming – although I do get a similar feeling after a particular hard training session in the pool. I remember my first open water win at a local competition in 2012,” describes Chamberlain. “I had no idea how to pace a 1500 race in a lake, and had to take a breaststroke break at about 800m because I had gone out too fast. It was a good experience, although quite painful at the time. However, I am now more aware of pacing for open water and pool swims.“

Last summer in South West France, he entered the Saint-Jean-de-Luz 1.8 km sea swim against 550 competitors. His speed, endurance and understanding of proper pacing in the open water led to a pleasant surprise. “I did feel guilty that I couldn’t speak French when they wanted to interview the winner…at the age of 40 I’d expected a few of the younger guys to have taken on the challenge.”