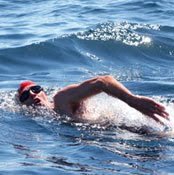 Andrew Flanagan and Ned Denison will give a seminar on marathon swimming tomorrow at the The Kingfisher Club in NUI Galway, Ireland. No fees, no registration, no waiting.

The affable, charismatic Ned will talk about the joys, agonies, celebration ,the cold and preparation for marathon swimming. He will explain in colorful detail what the sport is like and why it is different than pool swimming.

Ned is always encouraging and optimistic, but he is also brutally honest and will explain the odds of successfully crossing the English Channel and how to take the next move that can put a long swim in one’s life plan.

Andrew will discuss his preparations for his 2010 English Channel solo swim and his unprecedented 24K solo swim from Palmers Rock to Aughilish Island, his two-way English Channel relay in 2004 with Martin McCarthy and Katie Coyle and various swims from Clew Bay and Inis Bofin to Galway Bay.

Video above shows Ned in his Round Jersey Island swim.