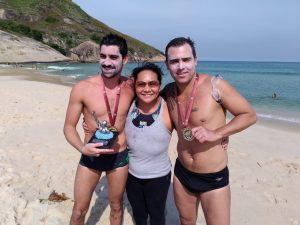 Courtesy of Adherbal de Oliveira, Travessia do Leme ao Pontal, Rio de Janeiro, Brazil. The Anjos D’Água 2 relay, formed by swimmers 44-year-old João Rodolfo de Queiroz Leite Pinto and 31-year-old Rodrigo Luiz Martins, completed the 36 km Travessia do Leme ao Pontal on May 30th in 11 hours 35 minutes . The duo team began at midnight and the two swimmers kept swimming towards the Pontal, each alternatively taking one-hour legs. There was a great climatic instability in the city of Rio de Janeiro during the swim window. Soon, the swimmers had to swim with oncoming and turbulent winds and currents with difficulty increasing as they continued to swim. Despite the difficulties, the swimmers and their support team witnessed a beautiful dawn on the edge of the city of Rio de Janeiro including a special moment where the sky displayed several colors reflecting off the Archipelago of Cagarras, Christ the Redeemer, Tijucas Islands and Pedra da Gávea. 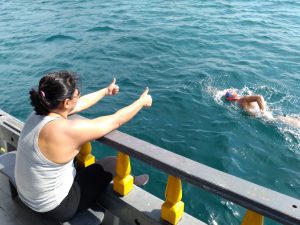 Rodrigo only learned to swim in 2015 and, even with little swimming time, he decided to challenge himself with his friend Ronaldo, who had been swimming since he was a child, but who had many difficulties adapting to long and solitary training in the pool. The pair were guided by coach Marta Izo [shown on left and above between the swimmers]. Copyright @ 2008 – 2019 by World Open Water Swimming Association