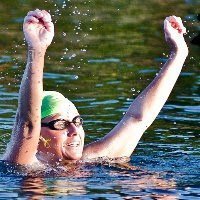 Sweden’s most prolific marathon swimmer Anna-Carin Nordin climbed up to #4 on the Oceans Seven list with her successful 12 hour 40 minute Catalina Channel crossing this week.

Before the swim, she estimated that “it will take between 12 and 13 hours” and was right on with her own prediction.

She has now completed the English Channel, the Molokai Channel (on her second attempt), the Catalina Channel and the Strait of Gibraltar. She has the Tsugaru Channel in Japan and North Channel between Scotland and Ireland scheduled for later this year and final channel, the Cook Strait, planned for 2014.