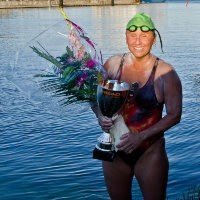 Anna-Carin Nordin just jumped to the front of the pack with her successful 8 hours 17 minute crossing of the Cook Strait yesterday.

Nordin now has 6 of the 7 Oceans Seven channel completed with a North Channel crossing scheduled for July.

As she has been training hard through her winter in Sweden in cold water, and has proven herself capable of swimming through jellyfish (Molokai Channel) and strong tidal flows (Tsugaru Channel), she appears extremely well-prepared for an attempt of the North Channel.

If she completes the North Channel in July, she has an extremely good shot at not only joining Stephen Redmond as the only two humans in history to complete the Oceans Seven, but also to become the first woman to do so. Two other women – Penny Palfrey of Australia and Michelle Macy of the U.S.A. – have also completed 6 of the 7 channels, but their attempts of the North Channel have not been announced. The Swedish marathon swimmer has always made her plans publicly known so it is going to be an interesting race as to which of the three women gets to the Oceans Seven finish line first.

Besides her 8:17 crossing of the Cook Strait between the North and South Islands in New Zealand, Nordin has also completed the English Channel between England and France in 2010 in 12:00:59, the Molokai Channel between the islands of Molokai and Oahu in Hawaii in over 18 hours in October 2011, the Strait of Gibraltar between Spain and Morocco in May 2012, the Catalina Channel between Catalina Island and the California mainland in 12 hours 40 minutes in July 2012, and the Tsugaru Channel between Honshu and Hokkaido in Japan in 19 hours 11 minutes in September 2012.

The mild-mannered mother of a teenage son was among the 15 selected nominees for the 2012 World Open Water Swimming Woman of the Year.

The current list of the Oceans Seven swimmers is here.