Anna Carin Nordin Transforming From A Sprinter To A Marathoner 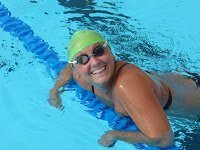 Anna Carin Nordin from Sweden has come a long way since she started swimming in Lidingö, a suburb of Stockholm.

After an age-group swimming career that focused on sprints in a pool, Anna Carin, she started doing long races (as it was called back then in Sweden) in 1985, she participated in the Riddarfjärden in Stockholm, the Vansbro simningen, Göta Kanal simmet and other races for fun.

But her interest in long racing really took off after her first son Erik was born in 1997.

With the encouragement of Leif Gillberg, she was inspired with sufficient motivation to increase to 10K distances…and beyond.

In 2009, she entered the FINA 10K Marathon Swimming World Cup event in Copenhagen and then stepped it up to the English Channel in 2010. With further training in Tenerife under the tutelage of Glen Christiansen, she really came into her own in 2011.

“She turned out great. She swam mornings and afternoons with the team lifting up the spirit with her positive and fun attitude,” recalled Coach Glen about Anna. “Every third day, she would do a 6-8 hour ocean swim outside of our hotel. The camp participants would take turn swimming with her for 30-60 minutes. It was very inspiring for me too. I think [her efforts] gave me the last push from liking ocean swimming to loving it. I admire her and respect her a lot. She is not a scholar. She is a doer!”

Following her passion and enabled by some tough training sessions, up to 100,000 meters per week, Anna’s season started with a 41K cold-water marathon swim between Sweden and Finland in 14 hours 51 minutes and culminated with another tough 42K warm-water crossing of the Molokai Channel in Hawaii over a grueling 18 hours and 30 minutes.

41K in Scandinavia and 42K in Hawaii is quite a far cry from pool sprints.