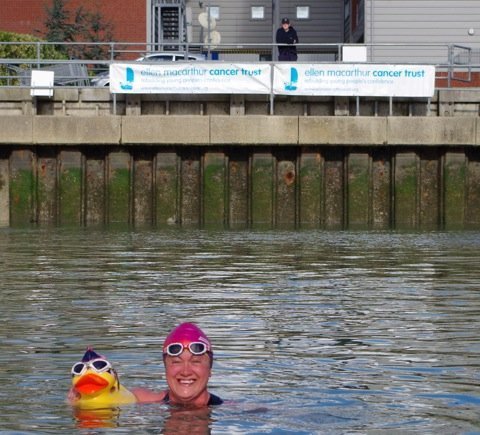 Like ice swimmers throughout the Commonwealth, Anna Wardley went training for a casual swim in a 6ºC (42.8ºF), sea.

Her goal: a 60-mile circumnavigation around the Isle of Wight to benefit the Ellen MacArthur Cancer Trust as the finale of her Five Island Swim Challenge.

With 2 islands down (7 miles around Dragonera in Mallorca, Spain and 13 miles around Portsea, Portsmouth), Wardley will tackle her remaining three later this year: a 41-mile (65.9 km) Round Jersey, a 30-mile swim around Tiree and a 60-mile (96.5 km) circumnavigation of Isle of Wight.

Wardley explained the challenges she faces when swimming around the Island, “I’m under no illusion about how tough it will be swimming solo and non-stop around the Isle of Wight. It is a mammoth swim by any measure and requires months of intensive training, complex logistical planning and a good dose of luck on the weather front to even make an attempt. I’ll be swimming in strong tides, day and night, for anything up to 36 hours, so it will spur me to know that I am raising vital funds for great charities like the Ellen MacArthur Cancer Trust, Sail Africa and the Samaritans.”

She will join a very select club of renowned swimmers who have circumnavigated the Isle of Wight: Kevin Murphy, Michael Read and Alison Streeter.

Her swim around the Isle of Wight Swim is sponsored by Navitus Bay, a renewable energy project joint venture between Eneco Wind UK Ltd and EDF Energy. Navitus Bay has kick started Wardley’s fundraising efforts by contributing £2,415 to her three chosen charities.

In an interesting twist to her open water swimming pedigree, Wardley will also row and sail around the Isle of Wight after she participates in the Round the Island Row on May 31st followed by the annual J.P. Morgan Asset Management Round the Island Race on June 1st when she will sail on one of the Ellen MacArthur Cancer Trusts boats.

Trust patron Ellen MacArthur admires 37-year-old, “What Anna has already achieved swimming around the first two islands is incredible, but to finish her Five Island Challenge with swimming around the Isle of Wight, a feat that only three people have ever achieved, is truly inspirational. We are so proud to be supported by courageous individuals such as Anna and our many other fundraisers out there, the everyday person pushing themselves to overcome hurdles and reach unreachable goals to help the Trust is fantastic.”

To find out more about the Five Island Swim Challenge, visit here.