Anna Wardley Makes It 3 Out Of 5 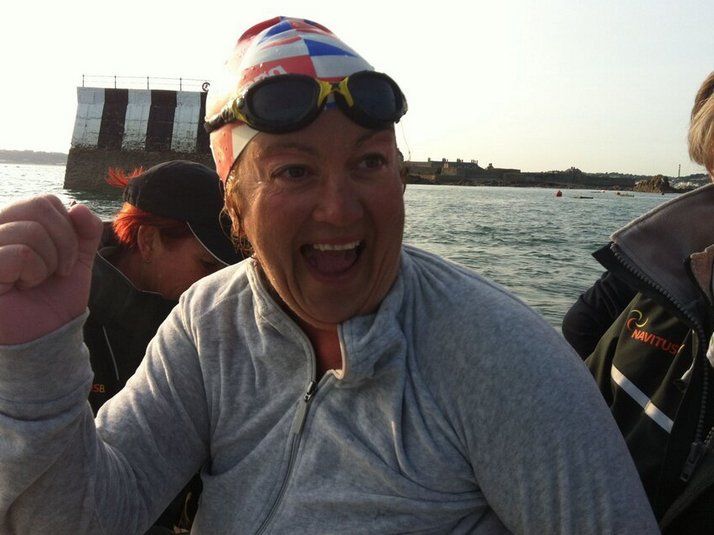 The 37-year-old completed the circumnavigation in a time of 11 hours 53 minutes. Last year she completed two of the five islands on her Five Island Swim Challenge list: Dragonera off the coast of Mallorca (10 km) and Portsea Island (21 km).

Her support team for the Round Jersey swim was led by experienced pilot Charlie Gravett, who helped her negotiate the strong currents around the island. There was a very tense period ten hours into the swim when Wardley approached the Corbiere lighthouse and the final turning point before the home strait.

As the tide started to come in there was a danger she would not make the turn in time and would have to abandon her attempt. But Warkley chose instead to miss a feeding stop and picked up the pace to beat the tide. From there she powered towards the finish line, beating her own target of 12 hours. Arriving at the finish line at Elizabeth Castle breakwater off St Helier, she said, “I feel amazing. When I’m training and during the swims when it’s really hard to keep going, this massive feeling of achievement is what drives me on.

I want to say thank you for all the tweets and messages of support that were being posted, and seeing the supporters at Corbiere Lighthouse, when I was really up against it and there was a risk that I might get beaten by the tide, was a brilliant lift and gave me a real boost. Knowing I have that ability to turn on the speed when I need to has built my confidence for the Isle of Wight in September. Three down, two more to go. Next stop: Tiree.”

Her training schedule this year has seen her spend five weeks in Mallorca, culminating in a 12 hour 24 minute crossing of the 27 km (16 miles) Cabrera Channel from the island of Cabrera to Sa Rapita in Mallorca. Swimming through jellyfish, she became the first woman to achieve the feat and was the first ratified non-wetsuit Cabrera Channel crossing to Sa Rapita as well as the earliest ever swim in the season.

In August Wardley will go for another world first when she takes on her fourth island, attempting to become the first person to swim 30 miles (48 km) around the Isle of Tiree, the most westerly island of the Inner Hebrides off Scotland’s west coast. In mid-September she will attempt her most physically and mentally demanding swim: 60 miles (97 km) around the Isle of Wight. This solo swim has been completed by just three people and is expected to take approximately 30 hours.

Wardley is raising funds for the Samaritans, Sail Africa and the Ellen MacArthur Cancer Trust through her Five Island Swim Challenge. To date she has raised £40,000 through her swimming challenges since taking up the sport six years ago, and has set a target of raising £50,000. Donations can be made via her website, www.annawardley.com.

Boyd Bennie, Director of Jersey Samaritans, was at various vantage points around the island to cheer on Wardley and said, “I think Anna is a very brave lady, taking on this immense challenge of swimming around five islands, to raise funds for her three favourite charities. As well as raising funds, she is increasing awareness of the support that is needed and is provided in the community by Samaritans and other charities. I congratulate her on her success in her swim around Jersey and wish her good luck with her remaining challenges in this feat of endurance.”