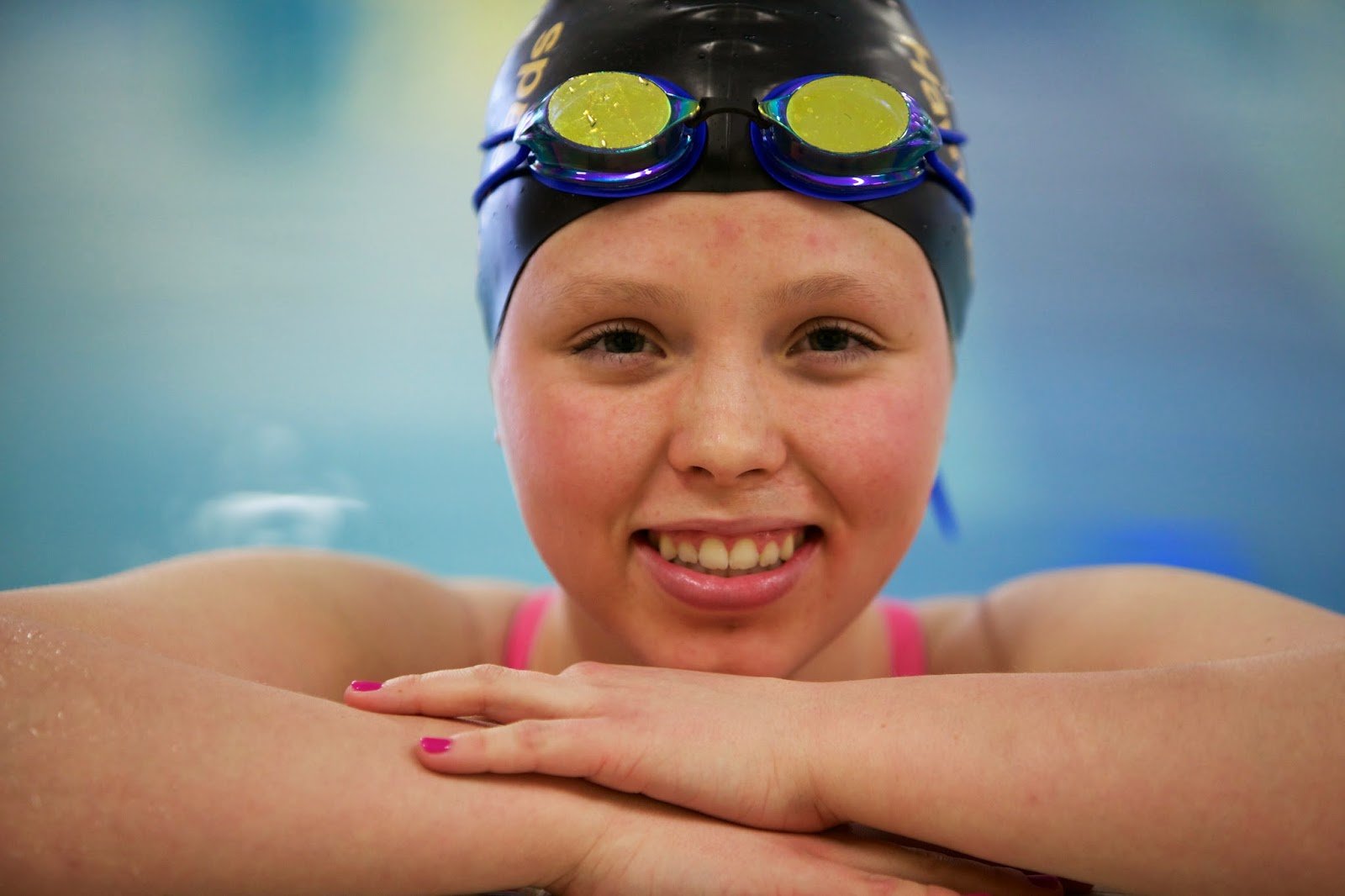 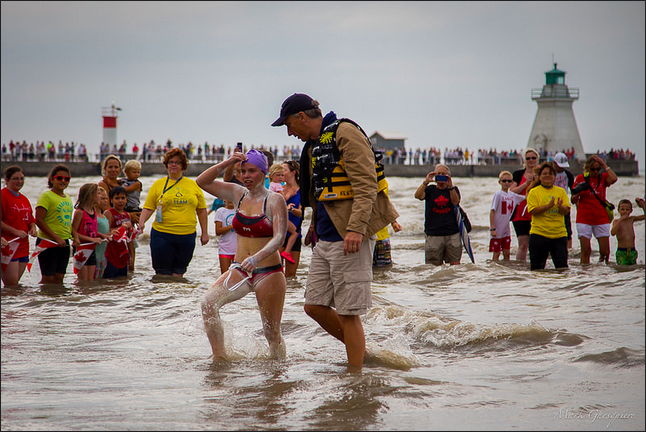 Annaleise Carr started at 5:18 am in the early morning of July 25th, 2014 on her attempted 75 km Lake Erie swim from the American shores at Erie’s Presquile Point in the state of Pennsylvania.

Eventually, she had to cut her unprecedented swim short, finishing around midnight at the 42.2 km mark at Long Point in Ontario, Canada 22 hours 20 minutes later. Over those long 22 hours, Rob Kent and Miguel Vadillo, both Swim Masters from the Great Lakes Crossing Organization, followed the Canadian teenager closely and wrote a detailed Observer’s Log.

The 16-year-old was certainly prepared for the longest swim of her life. Kent, Vadillo and her coach, Paula Jongerden, were also prepared with a wide variety of foods and drinks on board her escort boat.

Her swim started under nearly ideal conditions with only a very slight chop and the water temperature at 23ºC (73ºF). “Annaleise was calm, focused and swimming at 20 minutes per kilometers at a 68 stroke per minute pace. At 52 minutes, she ate four squares of a peanut butter and jelly sandwich and drank 6 ounzes of RE7. By 6:46 am, the sun was coming up as the water temperature remained steady and the air temperature rising slightly to 67ºF (19ºC). She had 4 and a half bites of pancakes and another 6 ounces RE7 for hydration as she changed goggles,” described Kent.

But by 7:30 am, the waves increased in size of 2 feet and white caps started to appear. “Annaleise remained happy and comfortable, though as she ate a cup of jello, some cottage cheese, and drank 4 ounces of RE7. At 9 am, the chop with 2-foot waves continued by Annaleise felt good as she stopped for 110 mL of apple juice and a bite of a ham sandwich and a peanut butter ball.”

At 9:45 am, the water and air temperatures had risen slightly with the rising sun, but so had the swells in the lake to an occasionally 5 feet. “She took another bite of a ham sandwich as well as a chocolate square and 100mL of fruit punch. By 10:30 am, the swells reduced in size and Annaleise remained in good spirits while she fed on a bagel with Nutella and peanut butter with almonds as had some more fruit punch as she averaged 75 strokes per minute.”

Carr remained in the same mindset over the next 2 hours under the same slightly windy conditions. At 11:38 am, she downed some fruit punch along with strawberries, blueberries, a fourth of a Nutella sandwich and a peanut butter ball, but her stroke count fell to 67 strokes per minute. She continued in good spirits as her second pace swimmer jumped in the water with her for 45 minutes. Seven hours into her swim, she had a few sips of fruit punch, chocolate almonds and another bite of ham sandwich.

Early in the afternoon, the wind speeds were reduced as the water and air temperatures were in the 72-73ºF (23ºC) range and Carr remained steady at a 66 stroke per minute pace. She had swum 23.5 km by 1 pm as her pace swimmers rotated in and out of the water. At 2 pm, she ate grapes and a peanut butter and jam sandwich and drank more RE7. At 3:30 pm, things continued normally as she consumed some yogurt and cherries and nectarines along with some apple juice right before she was to cross into Canadian waters 10 hours 27 minutes into her swim.

“By 4:15 pm, it began getting cloudy and a bit cooler in the 1-foot chop of Lake Erie. She drank hot chocolate, but ate no food as we gave her messages that over $120,000 had been donated to her cause of Camp Trillium, a camp for children with cancer. She was also getting text messages from all kinds of supporters, from the Prime Minister of Canada to Tom Arnold!” explained Kent. “At 5 pm, she was only able to eat one square of chicken sandwich and drink 3 ounces of hot chocolate. At 5:45 pm, she had a bite of a chicken sandwich, some yogurt and nectarines, and 4 ounces of hot chocolate as her stroke rate was 67 and looking good.”

At 6:30 pm, she drank another 4 ounces of hot chocolate with a half bite of a bagel and chocolate covered almonds. “At 7:15 pm, she actually told us two riddles with her pace swimmer in the water as she had 3 ounces of apple juice, a cup of chocolate covered almonds, a chicken sandwich bite, and peanut butter ball. A bit after 8 pm, her grandfather, mother and kayaker friend from North Dakota all stopped by to cheer her on as she had now completed 37 km of her intended 75 km. She took a bite of a peanut butter sandwich and had a peanut butter ball, but it was clear that she was starting to get cold as her hands were shivering a bit.”

At 11:30 pm over 18 hours into her swim, Carr started to show symptoms of exhaustion and the waves were pushing her around and her stroke count had dropped to significantly lower counts: 45, 43, 30, 53 strokes per minute. “She had long periods of breaststroke swimming as she was stopping every few seconds. She has not had any water, just hot chocolate and a few bites of a peanut butter sandwich. At this point there is very little progress,” Kent recalls. Six minutes later, Kent describes the situation. “Paula is encouraging her. She is making sense, but seems to be too tired and responding with monosyllables. Her voice sounded normal as she got back to 75 strokes and then returned to 5-7 strokes of breaststroke.”

This continued for another 20 minutes until 11:57 pm. “With the guidance of her coach and the two swim masters from the Great Lakes Crossing Organization, Carr decided to end her swim at Long Point and have a completed crossing rather than risk trying to make it further and not get a completed swim. At the time of her swim ending, she was completely exhausted and making virtually no progress. This appeared to be largely due to nutrition as she appeared to have bonked. It was a prudent decision to end the swim when and where she did based on her condition.

The conditions of the swim were quite difficult. The conditions never got too extreme, but were constantly challenging, the moderately sized waves never relented at any point over the 18+ hours. Overall it was a very strong effort and a very significant marathon swim.
“