Anne Marie Warding Off The Cold 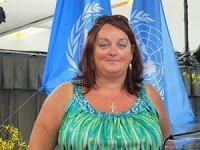 The training that goes behind channel swims, lake swims and marathon swims is largely unseen．They are largely solitary efforts, planned and completed without fanfare outside of the media and even the greater swimming community.

Earlier this year in April, Bruno Dobelmann completed a night training swim from 2 am to 8 am in the Bodensee in Germany. It was his toughest training swim in preparation for his 63 km attempt to swim across the Bodensee. Done in 9ºC (48ºF) water with the air temperature about the same, it was brutal.

Anne Marie Ward, the 2010 World Open Water Swimming Woman of the Year, explains what goes on with her own cold water training for her preparations for the North Channel. “I had to continue for a few years before I finally made it. I didn’t have a measured training programme. It was simply about getting in there and staying as long as possible. As I knew I wouldn’t get there fast, I really had to concentrate on staying in cold water as long as possible and knew that I could be looking at a 20 hour swim in 12ºC (53ºF).

In preparation I swam through the winters in the sea. I made a decision to stay out of the pool and work on mental and physical conditioning and endurance in the open water. The water temp drops to average 6ºC (42ºF) in winter and 3ºC (37ºF) in the inland bays so it is perfect training ground. Also our air temperatures rarely exceed 10ºC (50ºF) up to May and the wind chill from the northerly winds can make it feel even colder.

As I couldn’t physically stay in for very long periods in the coldest weather I would work on multiple emersions. Starting in spring, I planned 4, 6, 8 and 10 hour swims in tough conditions under 12ºC (53ºF). I remember a 4-hour swim in 8ºC (46ºF) against a 4-knot tide and in a force 5 wind. The 6-hour and 8-hour training swims were in 9ºC as I would try to work against the strongest tides as much as possible. Mulroy Bay and Lough Swilly here have really strong tidal runs so sometimes the boat would tie up to a mooring and I would have to swim hard in a threadmill-like fashion to stay still. Swimming against the tide became an integral part of our training and it certainly took the focus away from the cold.

I also did a lot of night training. The reduced air temperature at night would bring my body temperature down quicker so in addition to the mental side of night swimming in deep water, these training swims also helped from a conditioning point of view. From a work point of view, I had to do a lot of my training very early in the morning or at night

Ward‘s counterparts and nominees for the 2012 World Open Water Swimming Woman of the Year are posted here.