Anna Wardley, Heading Around Jersey By Way Of Singapore 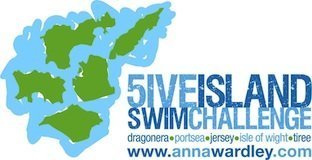 Anna Wardley is on her way to attempt a Round Jersey Solo, a 41-mile (65.9 km) circumnavigation of the Island of Jersey in the middle of the English Channel. The Round Jersey is her third stage in her 5 Islands Challenge charity swim.

But in her quest to complete these circumnavigations, she has thrown herself for another loop.

Even with the water around Jersey a cool 11.6ºC (52.8ºF), Wardley has what it takes to complete the circumnavigation given her training and background.

But she is currently training in Singapore where the water is a much more uncomfortable 31ºC (87.8ºF). While she is putting in the requisite distance in her pool and sea workouts, the warmer waters in Singapore are putting a serious dent into her cold-water acclimatization process.

“I’m working out in Singapore where the sea temperature is 31ºC. I’m only going to have 9 days back in the UK to acclimatise for my swim around Jersey at the end of the month. I never thought I’d be craving colder water but it’s definitely too hot to train here especially as they don’t allow you to put a bottle on the poolside to keep hydrated, and they throw you out of the pool every time it rains.”

But she will put in a good 9 days back home and then head off to Jersey in June, then attempt a 30-mile Hebridean Tiree, and a 60-miler around the Isle of Wight in September. A few weeks ago, as part of her training, she earned a €300 prize for completing the first non-wetsuit swim of the 17-mile crossing from the island of Cabrera to Mallorca.

With 2 of her challenges down, Wardley’s Five Islands Challenge is now building up in difficulty. Follow her here.