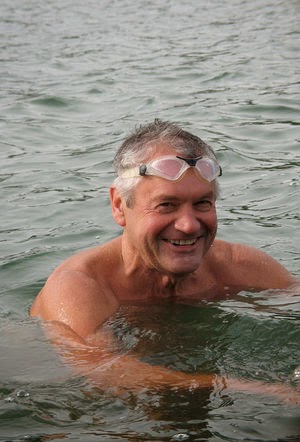 There are certain swims around the world that are initially considered unfathomable, but then swimmers who dream big eventually achieve them.

This month, there will be another epic relay. One that really raises the bar in the Pacific Ocean: a two-way Farallon relay from the Golden Gate Bridge out to the Farallon Islands and back, 60 miles (95.6 km) of cold, rough, oft-foggy, shark-encounterable waters.

“On April 25th around 7 am we will have six swimmers start a Farallon relay under the Golden Gate Bridge,” explains Captain Vito Bialla [shown above]. “The swimmers are Emily Kreger, Patti Bauernfeind, Simon Dominguez, Kim Chambers, Ashley Horne and Dave Holscher. The back-up and escort swimmers are Kate Webber and me. We will swim out to the South Farallon Island, do a flip turn at the Fisherman’s Cove buoy, turn around and swim back.

The team is expected to finish on April 26th around 1 to 2 pm – a swim that they estimate will take over 30 hours. “This is also opening day on the bay and the Tiburon Fire Department has organized a welcome with fire hose boats and some fanfare that will make this a memorable event,” says Bialla. “The swimmers are some of the best in the world and we have all been training hard swimming daily in the bay. The only thing that can get in the way is weather, but that has never deterred this gang.”

The team will be trackable via Spot Tracker as is always the case with the Night Train Swimmers.

For background information on some of the most epic relays in open water swimming history, visit here.