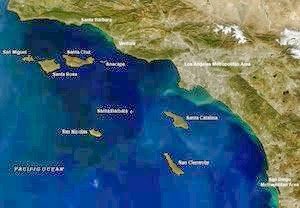 Back in June 1965, the Ventura Junior Chamber of Commerce offered US$1,000 to the first person to swim from Anacapa Island to the California mainland, a distance of 12 miles (19.3 km).

As a promotion for a local home decorator show in Ventura, the swim window was set for June 25-28th 1965. Three young swimmers made the initial attempt.

19-year-old Erick Gillen of Ventura, 23-year-old David Smith of San Francisco, and Canadian Betty Benedict all planned to attempt the swim within the window, but the weather prevented them from trying.

However, it was not until August 1978 when a 23-year-old college student, Cindy Cleveland, pioneered this channel swim in a historic 12 hour 48 minute double-crossing from Port Hueneme Beach on the mainland and back – a record that still stands. Since then there have been 43 solo crossings to date (October 2012), including a double crossing by Paul Lewis and a record crossing in 4 hours 38 minutes by Jim McConica.