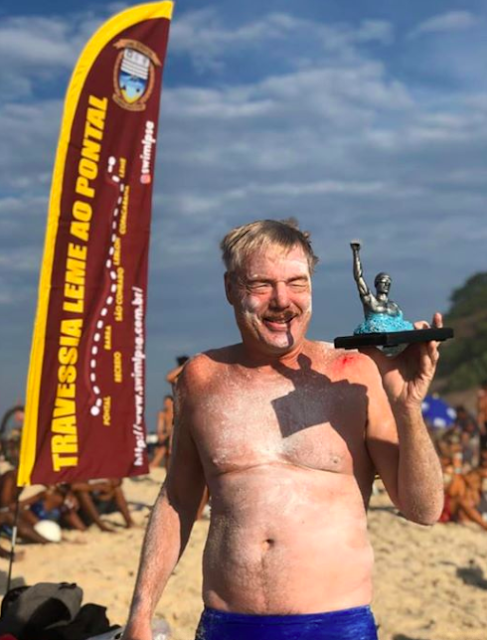 60-year-old American marathon swimmer, Anthony McCarley from Pennsylvania rubbed his shoulder raw today, but had a great day while continuously swimming ahead of his peers.

He was the first marathon swimmer to ratify a solo marathon swim with the Marathon Swimmers Federation when he completed an unprecedented 11.3 km crossing of the Pillsbury Sound between St. John and St. Thomas in the Caribbean Sea in 2014.

Today, he also became the first non-Brazilian to complete the 36 km Travessia do Leme ao Pontal when he swam from Leme to Pontal in 15 hours 33 minutes. Additionally, of the 28 previous swimmers who had completed the Travessia, McCarley is the oldest.

McCarley said about the swim, “It was beautiful, but very hard. From about the halfway point to the end, there the water was flowing against us. Almost every time I stop for a feed, I would be pushed directly backwards.

Adherbal and his team are all wonderful people.”