Anthony McCarley Taking It To Another Level 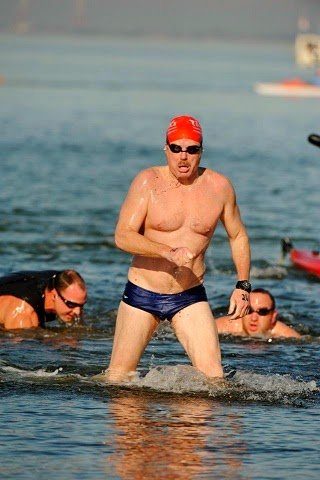 Anthony McCarley is from Berwyn, Pennsylvania who is one-third the way to his goal of achieving the Triple Crown of Open Water Swimming. After a 13 hour 29 minute crossing of the English Channel in 2013, he has his sights on completing a circumnavigation around Manhattan Island on June 28th and a Catalina Channel crossing 3 weeks later on July 19th.

The 54-year-old Half Century Club member has done competitive swims like the 8-mile Boston Light Swim, the Tampa Bay Frogman Swim (shown on left), the 24-mile Tampa Bay Marathon Swim, the 12.5-mile Swim Around Key West, and the 24.3 km Cape Circumnavigation Challenge around Cape May as well as completed an unprecedented triple-crossing channel swim between St. Thomas and St. John in the Caribbean Sea.

A humble, hardworking individual, McCarley was pleasantly surprised when he received the O’Clee Jubilee Award for the oldest person to swim English Channel under the auspices of the Channel Swimming Association in 2013.

“For me, this is so amazing. The CSA has a perpetual trophy for it, so my name is on there with Doc Counsilman, Michael Read, Otto Thaning, Bob West and a bunch of others – how cool is that?“

We asked the seasoned business executive a series of questions about his open water swimming goals:

Daily News of Open Water Swimming: What has driven you to attempt the Triple Crown of Open Water Swimming?
Anthony McCarley: From the time I was little boy, I had a burning desire to swim the English Channel. When I decided to put an action plan in place, the goal wasn’t about swimming or being in shape. I was singularly focused on the English Channel. It took me longer to do it that I ever thought possible, but the journey got me addicted to the sport of marathonsSwimming. Everyone is so supportive of each other. It is a great community. While masters swimming is nice, open water swimmers, and marathon swimmers in particular, take it to the next level. Through my swim travels and the Marathon Swimmers Forum, I feel as I have friends around the world that I would never otherwise have. I have also found that the swimming brings me joy – it is a connection to nature that I had lost in my life. I like to think I am swimming because of a relatively healthy addiction.

Daily News of Open Water Swimming: Do you have any particular strategy in tackling this goal – physical, mental or logistical?
Anthony McCarley: MIMS and Catalina are exactly three weeks apart, so I am approaching them as one 50 mile swim broken in the middle by three weeks. Physically, I will need to swim within myself – forget that MIMS is a race. During swims when I find myself going too fast or working too hard, I say to myself, “Let it go” and I relax. The “it” can be another swimmer, or any self-inflicted pressure. I plan to say “Let it go” a lot to myself over those three weeks. On the mental front, I accepted a long time ago that I am not a particularly good swimmer and along my journey I learned that even the best swimmers suffer from “dark” moments. When I hit my “dark” moments, I remind myself that even the best go through them and that really helps. Logistically, I think we’re in pretty good shape for Catalina, because Dan Simonelli has really taken me under his wing. I admit I am still learning about the logistics around MIMS.

Daily News of Open Water Swimming: What worries you most about each of the swims?
Anthony McCarley: My biggest worry regarding MIMS is finding the right speed – fast enough to make the turn while holding enough in reserve that I am not emptied at the end. For Catalina I am concerned about hitting the coldest water at the end of the swim, when I am at my weakest.


Daily News of Open Water Swimming: Do you feel 50 (years old)?
Anthony McCarley: I am 54, and 50 seems so long ago. I am not sure how 54 is supposed to feel other than what I am experiencing. I do know because of marathon swimming, I am stronger, more limber and in better shape than I was a 44. Particularly because I am a father of young children, being in shape brings more joy to other parts of my life.

Daily News of Open Water Swimming: How do you manage training with your professional and family responsibilities?
Anthony McCarley: It is really hard – I am never in as good of shape as I would like to be. As important as swimming is to me, family, friends and business come in front of it. I don’t work out as I think most swimmers do. Instead of swimming several times a week, I might only go to the pool two or three times a week. But on the days that I go, I try to swim sets between 10,000 – 15,000 meters. I believe longer swims are more valuable than a series of shorter swims and swimming this way saves on driving time, changing time and locker room chitchat time. I do try to do something every day towards the goal. It might only be learning something, doing dryland work or sitting in a tub of cold water, but for me it is important to do something every day to remind me of my goal.

Daily News of Open Water Swimming: Do people at work know of your challenge? If so, what do you think about it?
Anthony McCarley: If they think I am nuts, they haven’t told me. We have a pretty active group – mountain climber, kite-boarder, etc., so I think everyone is pretty enthusiastic about my swimming. There are a lot of characteristics of marathon swimmers that are valuable to business.

Daily News of Open Water Swimming: How do you maintain your enthusiasm? Do you ever find gearing up for training is a challenge?
Anthony McCarley: Training motivation is never an issue for me when I have a goal. I know that many, many things can and do go wrong in marathon swimming. The better shape I am in, the better the odds are of me being able to deal with those things. My first English Channel attempt ended a half mile from shore. Swimmers who are much better than I am, like Ron Collins, took two attempts at Catalina. Most of the swimmers didn’t finish MIMS last year. I know the odds of me completing both of these swims three weeks apart are tiny, probably less than 20%. I am scared out of my mind. That is all the motivation I need.

I maintain enthusiasm by picking goals that I don’t know I can accomplish – like swimming your Triple Crown in less than 12 months
.

Daily News of Open Water Swimming: Do you have a pair of favorite goggles, swim cap or swimsuit?
Anthony McCarley: I have a funny shaped nose, so most goggles don’t work for me and I can’t see without glasses…which made finding corrective goggles that fit impossible. Through the Marathon Swimmers Forum I learned about TYR’s corrective goggles. These goggles are by far my most important piece of equipment.

Daily News of Open Water Swimming: When you touch the other shore, what are the thoughts and impressions that first flood your brain?
Anthony McCarley: For most of my longer swims, I get a deep emotional wave of accomplishment rolling through me – it almost feels physical. When I finished the English Channel swim, the driver of dingy was focused on getting back to the boat so quickly that all I could think about was trying to find my pebble before he poured me into the dingy. I didn’t experience the wave of accomplishment until I was back on the boat…with my pebble. In January, I did three laps between St. John and St. Thomas in the U.S. Virgin Islands. This was the first swim under the Marathon Swimmers Federation rules and, whether these rules or someone else’s become widely accepted, I believe having a clearly articulated set of rules is an important step in the growth of the sport. It felt really good finishing that swim because I felt as if I contributed to the sport and community I have come to care so much about.