Anticipating And Dealing With The Cold 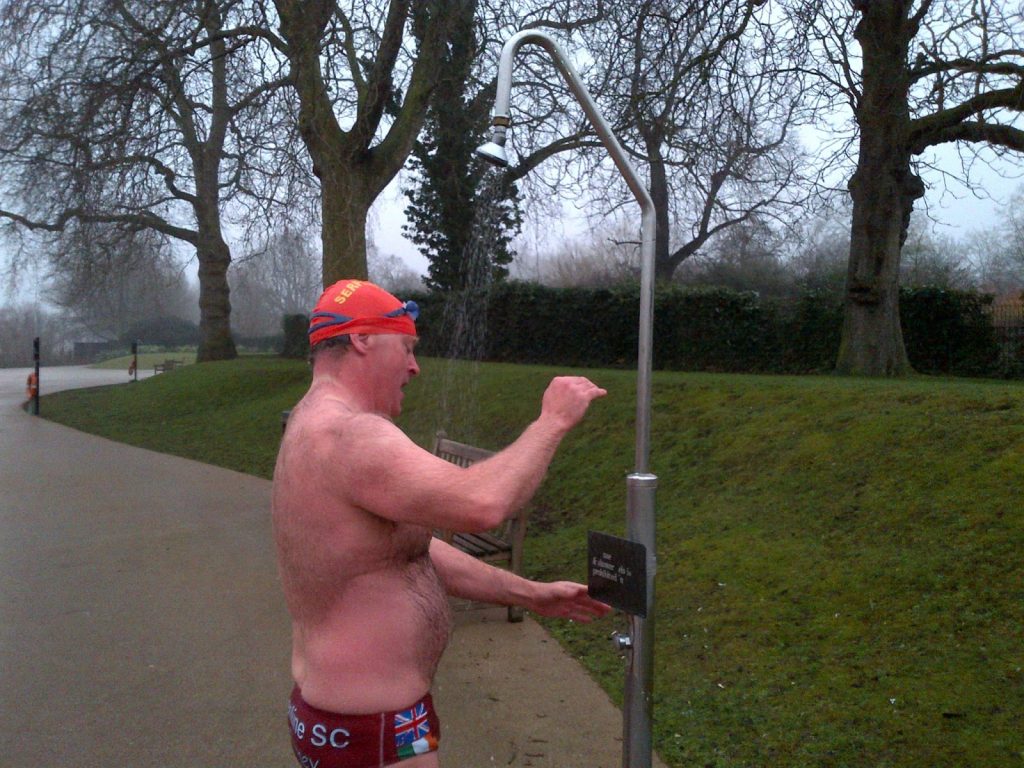 In the Mediterranean climate of Southern California where hundreds of outdoor pools dot the landscape, there are tens of thousands of swimmers who train daily under professional well-paid coaches.

Framed by San Diego in the south to Santa Barbara in the north, and Pasadena in the east and the Pacific Ocean to the west, not only are the swimming pools in nearly every Southern California community open from early morning to late at night, but the water that comes from the showers along the public beaches is warm. Lifeguards roam the beaches year-round and the many piers are crowded by multitudes on weekends.

The region has produced many Olympians, world champions and open water swimming stalwarts from Lynne Cox to Penny Dean, Forrest Nelson to John York. The land of aquatic abundance is quite dissimilar to the basics that the members of the Serpentine Swimming Club have.

While shivering is the post-swim norm in California when the water drops down to 12-14ºC, the Serps do not even shiver after swimming in 34ºF (1ºC) water for up to 15 minutes. Their skin barely turns pink, although their epidermis is as cold as ice.

It as if the Californians and Serps are two different species of aquatic mammals. How did this split in the human DNA occur? Why does the physiological response to cold water differ so greatly between the American Left Coasters and the hardened Londoners? When the water temperature is 34ºF (1ºC), Toes In The Water is exactly what the Californians do while the Serps simply get on with it and do not even hesitate or hyperventilate as they walk into water that borders on turning solid.

The Californians talk of diets and nutrition, while the Serps are generally lean physical specimens whose physiques are the envy of society. The physiological ability for the Serps to not get hypothermic and not shiver after 1ºC workouts is naturally related to a gradual acclimatization to the cold, but our observation is that this stoic calmness in freezing water exhibited by the Serps must be related to their mindset of just get on with it. “Just get on with it” is a slogan and phrase that seemed to ooze from the very walls of the Serps locker room. Like sugar and milk, “just get on with it” seems to be an integral part of the tea enjoyed by the Serps.

“Just get on with it” sets high expectations that everyone is expected to take part. No questions asked, or excuses granted.

“Just get on with it” establishes a mindset that the elements simply do not present an obstacle to swimming. The phrase feels like the layman’s hint of anticipatory thermogenesis. This scientific term was first described by Professor Tim Noakes of the University of Cape Town when he recorded Lewis Pugh’s ability to raise his core body temperature by nearly 2°C in anticipation of entering the freezing water during his swims in Antarctica. Anticipatory thermogenesis or the creation of heat before an event is a phenomenon that had been frequently noted by several recent ice swimmers.

“Just get on with it” creates an ambiance that every member is part of a community with a commonly shared camaraderie.

With those high expectations and that stoic mindset buoyed by a friendly ambiance of heart-to-heart camaraderie, the cold-water toughness of the Serps is the result.

But the mindset of the Serps is augmented by the gradual cold water immersion they do from summer to fall to mid-winter. As Dr. Sakura Hingley explains, “They shiver less as they ‘lose’ their shivering response.”

As International Ice Swimming Association founder Ram Barkai concurs, “The issue of raising body temp pre-swim has been found in most of our regular swimmers. I had my core body temp rising by 1ºC before [my] two Norway ice swims. It was measured using a capsule and a tracker. [But] we have swimmers that shiver more than others. We have noticed that experience helps a lot in controlling our shivers. We try and teach everyone to control their shivers, else it becomes an uncountable one and wastes a lot of energy. In our experience, if you keep focused after a very cold swim, try and breathe deep and remain calm, you can build up some control of shivering. I hardly ever shiver anymore regardless of cold, icy or other swims.”

Similar to the Russians who recover from ice swims by rubbing snow on the skin, John Tierney takes an icy shower after getting out of the 1ºC water in the Serpentine (shown above in Hyde Park). This experience is what Barkai is currently exploring. “I am even more interested in the recovery phase than the ability to swim in ice water. The Russian experience [at the Russian Winter Swimming Championships in Tyumen, Siberia] taught us a lot. Wet recovery rather than dry recovery is important.”

Swimming in freezing water is both a mind and body game and, from our observations, the Serps and the South Africans have perfected it.

But as Nick Adams, a recent inductee in the International Marathon Swimming Hall of Fame, explains, “There are hubs like this in various places in the world, where normal people regularly do what outsiders believe is superhuman and unique. Hundreds of swimmers from the Serpentine Swimming Club have been swimming large distances and times in near frozen water since the club was formed almost 150 years ago. We don’t think of it as a unique skill. I believe there are millions of people that could do these swims.

What the SSC is, is a collection of people swimming in very cold water because they enjoy it and want to do it. There’s no PR. There’s no publicising what they’re up to. There’s no ego. There’s no competition. There’s no prizes and recognition given or sought. They do it for the love of it. This is the sport of ice swimming in its most natural and pure form
.”

Editor’s Note: There are undoubtedly some Left Coasters who are as acclimated to the cold as the Serps are.