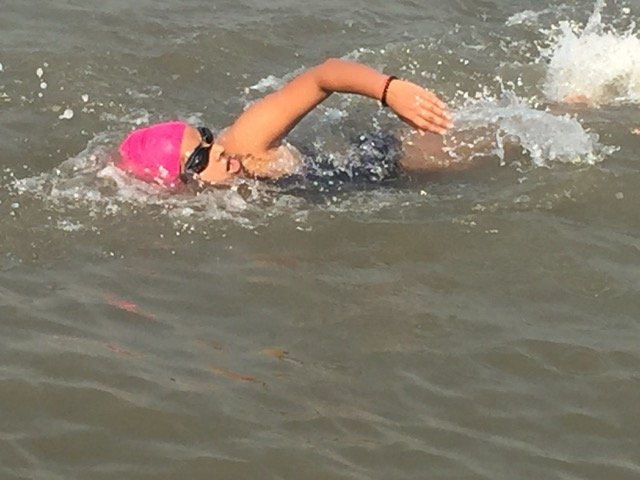 Anushka Purandare completed her first solo marathon swim despite the strict demands of her academic career in India.

It is a difficult choice for young Indian swimmers to make: follow their dreams of open water swimming or focus on their all-important exams that help shape their professional careers and future lives.

“We chose second biggest tide of the year on March 12th for the swim,” explained her coach Jitendra Khasnis. “However, Anushka’s final exams started from that day.”

“I was worried, I didn’t want to let go this opportunity, but my College Principal permitted me within no time,” recalled Purandare. “That was sigh of relief.”

Tejas Shankaran, an experienced marathon swimmer paced her towards the end of her 4 hour 59 minute swim across the Gate Way of India to Belapur in the Arabian Sea outside Mumbai. “Just 200 meters before finish, the conditions generated a heavy current under the Belapur Bridge. I was frightened there. I drifted away from Tejas in just a split second. She looked comfortable, but I was struggling. I thought something went very wrong.”

But the 17-year-old came through at the end said Khasnis. “Anushka managed to cross the current and touched the jetty in fashion, by doing butterfly for last 40 meters to become the first female to swim the Gateway of India.

Anushka is very dedicated girl. She has shown great interest in open water swimming and received good marks in her Board exam, but she chose Bachelor of Art degree so that she can pursue her swimming career.”

Dr. Snehal Purandare, the proud mother of Anushka, was thrilled with the swim. “I attended so many treks, but this was a different voyage, a unique experience. Anushka is now training to gain some more speed to swim much faster, much longer.”