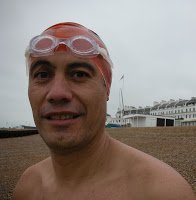 A promising young age-group swimmer, he became the Mexican national champion in the 1500 meters and developed a love for the open water. He won the well-known 4.5 km Maraton Internactional Virgen de Guadalupe, Reina de los Mares in Acapulco 12 times.

“I really enjoy the experience of not having lanes and no boundaries. Long distance was a pleasure for me to swim. When I was on the national water polo team, I heard about a 42 km professional marathon race in Baja California. With only had 3 months to train, the 26-mile race took me 10 hours 37 minutes, but I felt incredible to finish.

So I began to look for more professional marathons in Egypt, Canada, USA and Europe over the next four years
.”

The joy of competition was clear, but there was also incredible pressure. “At a amateur event in Lake Genève from Switzerland to France, somebody stole all my money. Before I could return to Mexico, I had another pro race in Canada, the Traversée Internationale du Lac Memphrémagog, a 42 km professional swim in Magog. When I arrived in New York with only US$100 in my pocket, I decided to go to Magog instead of returning to Mexico. If I did not finish in the top 10, I would not have any money. That was the depth of my passion for the long distance swimming. Fortunately, I finish in 10th place and received US$1,000.” He retired in 1990 after his first son was born and helped promote the sport by writing magazine articles and helping organize open water swims for the Mexican Swimming Federation. In 2008, at the World Open Water Swimming Championships, he led the Mexican delegation of two male and two female swimmers where they all placed in the top 25 finishers. “Only three nations finished with their four swimmers in the 25: Russia, Great Britain and Mexico. That was one of my best results as a member of the Federation.”

Omar often talks about the joy of swimming open water and the freedom it affords him. “The landscapes of the marathon swim in Sumidero Canyon, the orientation of the races between Capri and Napoli, the underwater sightseeing of the Caribbean, the route of Magog, the small green krill that you can see glowing in your hand at night in Acapulco when the moon is lighting up the ocean, and the experience of the English Channel are things that you have to be there to really feel them.”

In 2006, he was invited to swim on the Sport City relay in the English Channel. That small talk led to large swims. “With one year of preparation, I was sure that it would be a very nice experience. The goal was to swim 4 consecutive times across the English Channel – 4 x 32 km nonstop. Only a Australian team had completed a four-way crossing before in 43 hours. Our other goal was to raise money for children with health problems, enabling one [surgical] operation for every kilometer [we swam]. Each operation cost US$3,000. With a very good sponsor, Alejandro Marti, the owner of Sport City, one of the biggest sport clubs in Mexico, Marti took care of the expenses and sponsorships. We were supported by Telmex, the biggest telephone company in Mexico, and Televisa, the biggest TV broadcaster. And the end, we have enabled 3,000 children to be operated on.

We were able to cross the Channel 4 times. I arrive on the second leg to England about 2:20 am in 14ºC water. We finished in 42 hours 11 minutes for a new world record that is still stands. The next year, our same team tried to swim 3 times from Africa to Europe. Nobody had done it before, but we were only able to cross twice, from Africa to Europe and back to Africa. In 2009, our team swam 165 km over 3 days in southern Mexico.”

And the circle of life continues. “This week, I will take the ashes of my father to the second highest volcano in Mexico where he wanted to be. I told my son that he has to take my ashes to Sumidero Canyon, the most beautiful place to swim open water in the world.”