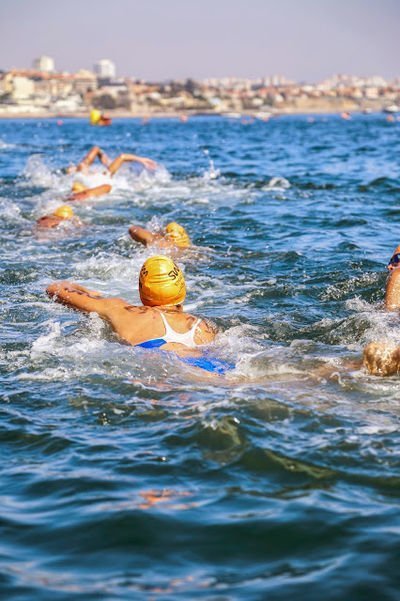 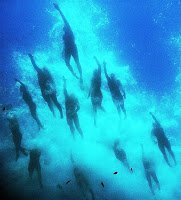 A group of competitive open water swimmers got together in Seal Beach, California and had a heated discussion about drafting and swimming in the lead.

* Could it be that the lead swimmer senses a change in his feel of the water and thus adjusts? This adjustment gives the perception of swimming slower which is reinforced by the trailing swimmer.

The arguments on either side were valid and the debate was contentious. We believe the answers depends on a variety of factors including:

1. Is the lead swimmer fundamentally an Alpha Dog or an athlete with a lower level of self-confidence? An Alpha Dog would not be slowed by drafting swimmers; it would stoke their adrenalin.

3. Where are the turn buoys, feeding station, rock jetties or other obstacles in the race? The leader could be at a significant advantage depending on the next tangent to be swum in the race. That is, if the turn buoy requires a 180° turn (on an out-and-back course), then the leader is facing a navigational advantage and those behind are at a tactical disadvantage. If the turn buoy or obstacle in the race requires anything less than a 90° turn, then the lead swimmer does not have the same sort of navigational advantage.

Natural changes in the race pace like swimming through a feeding station will also change the dynamics of the lead swimmer and trailing swimmers. So a lead in the first half of a 5 km or the first half of the Waikiki Roughwater Swim (for example) is almost immaterial because there is so much more racing to do. For example, a lead coming into the finish at the Dwight Crum Pier-to-Pier Swim or Newport Beach pier-to-pier swim or the Huntington Beach Pier Swim with the surf pumping is significant…unless the trailing swimmers are in a better position to catch a wave.

But could it be that a swimmer actually feel a trailing swimmer without actually seeing them? That would also like having a sixth sense or the human equivalent of the ampullae of Lorenzini which are special sensing organs called electroreceptors that form a network of jelly-filled pores found in sharks. Basically, such talented swimmers with a sixth sense who have some kind of perceptive receptors in their brain would literally feel the changes in wave structure and dynamic electric fields in the water behind them.

Feel free to submit your consenting or dissenting opinions to headcoach@openwatersource.com.