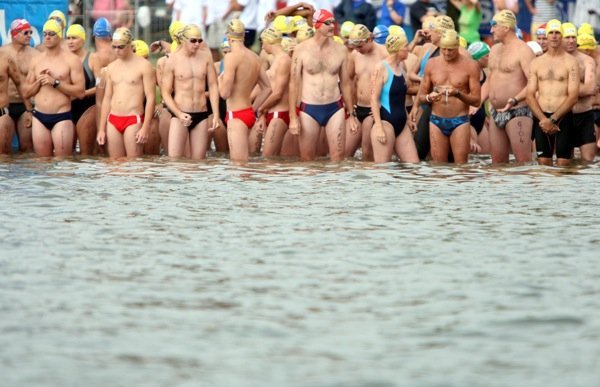 Dorothea Sofia Rosselini in Oceanswims.com penned a compelling set of reasons to start integrating speed-based start waves instead of grouping individuals at open water swimming starts according to their age.

The following is her take and recommendations for substituting the traditional age-based starts with speed-based starts:

In the wake of debate, which is relentless, over the best and safest way to start an ocean swim event, we received a suggestion from an interested punter involving starts based on the speed of swimmers. The organisers of the now-defunct Tama-Cloey swim attempted something similar a few years back.

Speed starts for safety and comfort
I am sick to death of being kicked in the face by people I catch up with, clawed on the legs by people overtaking me, and smacked over the head by people crowding me left and right while everyone tries to overtake everyone else. What the hell is it with age-based starts? We need to switch to speed-based starts.

1. On your entry form, you nominate your speed IN A POOL (standard conditions, guys!), and over the race length (not some sprint distance!)
2. This is used to assign you to a speed band.
3. On the day, speed bands take off in the order fastest through to slowest, ie. Fastest band takes off first. A mere 30 seconds, later the next speed band takes off. Then, 30 seconds later, the next, and then next.

What are the benefits?

1. A smooth swift start, with none of the lengthy hanging about on the beach between age-cohort start, because…
2. …with a speed-based start, there is no need to “stretch out the field” by keeping each start wave well apart. Effectively, the field starts stretched out already, only…
3. it’s correctly stretched, i,e., the stretching-out will actually do the effing job of keeping bands apart.
How unlike age-based starts, where someone of 30 might spend their whole race fighting past earlier but slower starters, AND being crawled over by even faster swimmers who started later, and either way, menacing and being menaced by jostling co-racers from start to finish.
4. In a speed-based start, everyone swims along harmoniously, in their speed bands. These will stretch out a bit as the race goes on, but with minimal drama and collision. Overtaking will be rare, and gets rarer as the race progresses.
5. Booees will be rounded in a nice spread-out stream with minimal traffic-jamming — oh yes!!!
6. And if the organisers have a brain in their heads, the speed bands will be colour-capped in an easily remembered order — red, orange, yellow, green, blue, indigo, purple, pink…? Imagine the safety benefits! Staff on the water who see a yellow cap in among the blues, say, will instantly know that this swimmer may be in trouble, because they’re swimming slow for them. Ta da!
7. Racers and pootlers all swim happily in the same event. People who just want to pootle along enjoying the ocean swim can nominate their pootling speed, not their racing speed. Then, on the day, they’ll be in with a speed band that allows them to pootle, as plannedâ without constantly having to dodge swinging arms and thrashing legs. (‘Back of pack’ divisions don’t work for many pootlers, because many pootlers nevertheless pootle pretty fast.)
In sum