Are You Tough Enough For The Body Brain Confusion Swim? 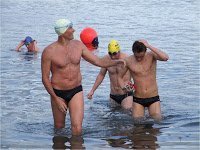 While there are the outliers like Dan Martin, Diana Nyad and Penny Palfrey who train outrageous distances who swim 4, 6, 8, 10, 12 and more hours per day at their training peak, what do the typical jocks do to prepare for their big day on the ocean?

75 intrepid individuals are about to show the world – and themselves – how tough they are. Like a boot camp for the courageous aquanauts, these swimmers are flying in from around the world to test themselves in the Ned Denison‘s renowned Cork Distance Week.

They will voluntarily push themselves to greater lengths and depths in the open water than humanly thought possible.

Denison explains about the coldest, most difficult open water distance training available in the world. “Swimmers experience a range of different training locations: lake, river, exposed beaches, around islands and offshore locations without locations without a clear reference to land. It builds an appreciation of the swimmers who never know what the conditions will be on the day of their big swim so they are prepared for anything“.

The first seven days include double workouts in the morning and evening. “Then the week get interesting.  Day 8 is the total Body Brain Confusion Swim. A team of ‘torturers’ go out of their way to remove any mental comfort that the swimmers may be experiencing. The total amount of training time remains unknown, the swim course is never straight, the feeds remain infrequent as every possible irritation is tossed in the swimmer’s way to prepare them to handle the unexpected during their Channel swims.”

Unconfirmed rumor has it that Denison tossed an armful of nettles in the water as part of the Body Brain Confusion Swim on the last day, but reality is reportedly not that far behidn.

Denison explains the reason for putting the swimmers under such mental and physical stress, “Most English Channel aspirants will rest for their 6-hour qualifier and look for 15°C (59°F) calm waters – so in a sense the ideal FIRST six hour of their planned marathon swim.  On the last day in Cork, the swimmers qualify for the LAST 6 hours of their planned marathon swim.  The crews become all-caring and helpful.  In Sandycove, the waters are in the 10-13°C (50-55°F) range, rarely calm and the swimmers have just endured their toughest 8 days of cold open water training of their lives.  They leave with a sense of confidence that can see them through their future plans.”

Nick Caine, a 16 year old from California, was the first swimmer to enroll in the first distance week in 2009.  He completed his English Channel solo and said it wasn’t nearly as tough as the Cork Distance Week that ended in the Body Brain Confusion Swim. The 2012 version quickly sold out with 75 individuals willingly and anxiously looking forward to proving their mettle.