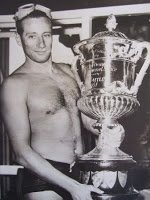 A native of Rosario, he was inducted in the International Marathon Swimming Hall of Fame as an Honour Swimmer in 1978 after a career where he won in rivers and ocean, warm water and cold water, under calm and rough conditions.

These races brought the best in the world together and were the professional world championships of that era.

He continued to inspire next generations of marathon swimmers in Argentina after his professional career was over. He won the 1960 marathon in Miramar, Argentina in 1960, completed the Strait of Gibraltar in 1974 in 5 hours 43 minutes at the age of 43, finished a marathon swim in Termas in 1990 at the age of 59, and completed a solo Maratona del Golfo Capri-Napoli in 2002 in 6 hours 15 minutes.