Around The Island In New Jersey With David Weinberg 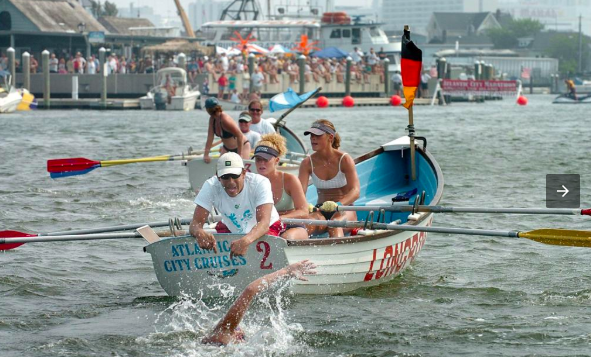 German swimmer Britta Kamrau was escorted by coach Augusto Corestein and the first female rowing team (Erin Sykes and Mary Logue) in the 36.2 km Atlantic City Around the Island Swim that was held on August 13th 2005 [shown above].

Read David Weinberg‘s article on the past and future of the swim around Absecon Island here.

The swim is being revived by Robin Taylor around Absecon Island in New Jersey.

For decades, the Atlantic City Around The Island Swim was a highlight on the annual professional marathon swimming circuit.

The greats of the 1950s, 1960s, 1970s, 1980s and 1990s races around Absecon Island in Atlantic City. The race was the ultimate marathon test with rough water turbulence, strong winds and angry ocean swells on the ocean side of Atlantic City and warm, flat water on the bay side of the island – between two inlets where swimmers fought hard against currents.

Two local lifeguards, Ed Solitare and Ed ‘Dutch’ Stetser, first accomplished the feat by completing a circumnavigation around Absecon Island after a bet made in 1953. The first race, masterminded by Jim Toomey, in 1954 was won by International Marathon Swimming Hall of Fame Honor Swimmer Tom Park.

Over the decades, other Hall of Famers from Greta Andersen to Paul Asmuth won the event. Current American president Donald Trump sponsored the event (see history here). The Trump Marina was site of the finish of the 1989 Around the Island Swim when the Trump Marina and other casinos in Atlantic City donated funds for the prize money in the 1980s. During the 1989 race won by David Alleva in 8 hours 5 minutes over Asmuth and Robert Schmidt, 24 athletes also swam past the Trump Princess. Trump came down to shake the hands of the winners and hand out the prize money.

Event fundraising and Co-Volunteer Coordinator Robin Taylor explains, “It is with great pleasure that Green Whales Inc., with the blessing and support of the Whelan family, City of Atlantic City, local police and fire/rescue departments, the Atlantic City Board of Education, USA Swimming, the local beach patrols in the cities of Ventnor, Margate, and Longport, announces that we are bringing the Around the Island Marathon back to Atlantic City and the surrounding waters to honor the late Jim Whelan.”

Green Whales has spent countless hours working to bring the 22.75-mile Around the Island (ATI) Marathon back for its 54th swim. It will be a wonderful and safe festival that will last the test of time. Our plan is to bring this festival back year after year, eventually making the international event as it once was.

As word has spread throughout New Jersey, we have been contacted by numerous New Jersey Beach Patrol captains who want to be involved. The outpour of support from the swim community over the past few months has been amazing

The Jim Whelan Open Water Festival will offer 16 individual athlete spots and 8 relay team spots (up to 6 athletes per team) for the ATI Marathon.

All proceeds and fundraising from the festival’s three races will help support the free Whelan’s Whales program and the Atlantic City youth swimming and water safety programs.