As The Pros And Amateurs Gather In Santos, Brazil 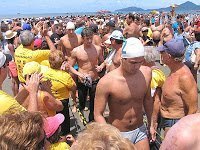 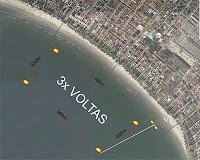 The first leg of the 2010 FINA 10KM Marathon Swimming World Cup circuit will be held on January 31st – and will be a great indicator who is in shape or not.

Hosted by the Brazilian Swimming Federation and organized by two-way English Channel swimmer Igor de Souza, a member of the International Marathon Swimming Hall of Fame, the race should culminate in an exciting finish and great kick-off to the 2010 season.

But the pro race will also be held in conjunction with an opportunity for amateurs of all ages and abilities to participate in 1K, 2K and 4K races in the I Etapa – Santos event (Copa do Mundo da FINA). Like the pros, the amateurs can showcase their talents in the beaches of Brazil.