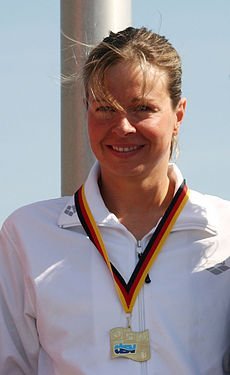 It was sweet to see a 38-year-old come so close to capturing the gold medal – any medal – in the showcase 10 km marathon swim at the 2013 FINA World Championships.

Few things are as amazing and inspiring as watching veteran Angela Maurer swim stroke-for-stroke at the highest levels of the sport. Motherhood has not slowed her down, but the years have added to her wisdom and prowess in international marathon swims.

“I turned 38 years old during these Championships,” says Maurer. “But we will take it year by year to see if I go for the 2016 Rio Olympics.”

While American pool sprinter Dara Torres was globally celebrated for winning 3 silver medals at the age of 41, Maurer continues to slug it out with world-class competitors much younger than herself, in races that are measured by hours not meters. How does she do it between balancing motherhood and the training demands of endurance sports?

Maurer was totally spent after earning a bronze in today’s 10 km marathon swim (race results and summary are posted here). “I can only say it was great; it’s my first medal in the last 10 years.” She trains wisely with the guidance of her partner and coach Nikolai Evseev.

“I can only train very hard two times a week,” she explains. “I still swim a lot, but it takes me much more time to recover. But I also work a lot on my strength with dryland training. It is important to have enough power and strength.”

Maurer is representative of the fastest growing demographic in the sport of open water swimming – and she is doing it among the fastest women in the sport. At the recent FINA Open Water Swimming Grand Prix competition in Isla Cozumel, Mexico, she even mixed it up with the world-class men. As the lead men’s group came around the 12-loop course and caught up with the women, Maurer latched onto the top men and hung onto their pace. “We were going fast,” admitted Simone Ercoli of Italy. “The pace was tough.” But Maurer’s strength against the currents enabled her to stay with her male colleagues, and separate herself from everyone but fellow Olympian Martina Grimaldi and Rachelle Bruni of Italy.

“I will continue swimming, but I do not know for how much longer,” she said as she rolled her eyes and smiled sweetly at Coach Evseev.

We hope that the Honour Swimmer in the International Marathon Swimming Hall of Fame swims on as she continues to demonstrate what is possible at any age…like she did today at the FINA World Championships 10 km marathon swim.