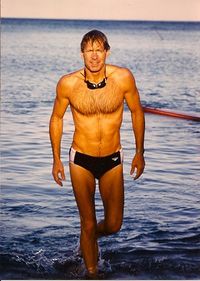 During his 13 hour 35 minute Molokai Channel crossing, Dr. Huffaker saw a large shark underneath him and immediately headed for his escort boat to call it a day. But the shark had other ideas when it then swam between him and his boat. Because his escort boat was positioned too far away for an easy escape, he put his head down, continued on and ultimately reached his goal.

As his dentistry practice expanded, he kept swimming and staying fit by doing a lot more ocean swimming off the shores of Oahu. By 1972, he decided to do another Molokai Channel crossing; this time in the other direction that took him 16 hours 15 minutes.

Now, at the age of 75, still fit, still trim and still swimming, Dr. Huffaker is aiming to become the oldest person to cross the Molokai Channel. His charity crossing to benefit the of Duke Kahanamoku Foundation is scheduled for this coming September.

Photo shows Dr. Huffaker at the age of 50 after another Hawaiian Isle channel swim. He has crossed the 30-mile Alenuihaha Channel (Hawaii to Maui) in 20 hours in 1970 after his initial failure of 17 hours. He crossed the Molokai Channel from Molokai to Oahu in 1967 and was the first person to cross between Oahu to Molokai in 1972 after a failed 20-hour attempt. He has swum the Maui Channel three times and was the first person to cross the 9.3-mile Kalohi Channel (Molokai to Lanai) and crossed the 8.5-mile Palilolo Channel (from Maui to Molokai) in 1989.