Atlantic Dash Is Dashed But Rescheduled 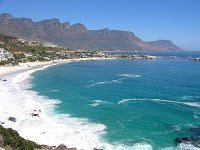 “But we race this weekend.”

The first swim race from Clifton Fourth Beach to Three Anchor Bay will be limited to 20 elite swimmers on April 21st. The Atlantic Dash re-evaluated its safety issues around the challenging swim.

“Due to the high cost of providing safety mechanisms for swimmers strung out across a long distance, we have selected a limited number of swimmers, based on their overall ability to stay within a reasonable distance from each other – and notwithstanding the competitive nature of the race,” explained Yach. “Open water sea swimming is an exceptionally tough sport due to unpredictable sea and weather conditions, and the presence of Great White Sharks.”

But true to the hardy talents and hardened nature of South African swimmers, Atlantic Dash participants are not permitted to wear wetsuits and the risk of hypothermia from the cold Atlantic Ocean is another danger.

The Atlantic Dash offers cash prizes of R5,000 (US$638) for the first male and female swimmers and R2,500 (US$319) respectively for their paddlers, a first in the open water swimming world.

“We also hope spectators and pedestrians will walk the route along the promenade and support the swimmers,” said Yach. “The swim will start at 10 am at Clifton Fourth Beach and is expected to take about two hours. Due to the risks associated with open water swimming, the new race is dependent on optimum conditions. A final call will be taken a few hours before the race is due to start.