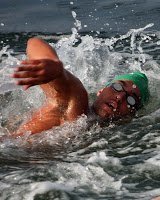 Brendan Capell, the 2004 world 25 km champion, is training hard and counting on his Aussie mate, Olympian Ky Hurst, to help him break the 6 hour 57 minute English Channel record of Petar Stoychev this summer.

Brendan and Petar have competed againstone another before in 25 km races around the world, but the English Channel presents a battleground. In Stoychev‘s case, he had Yuri Kudinov chasing him the entire distance, constantly pushing him and putting pressure on him to become the first person in history to break 7 hours between England and Franc.

In Brendan’s case, he will have Ky helping him the entire distance, occasionally jumping in and swimming with him to maintain a fast pace (at least 75 strokes per minute with a strong kick).

The two have been training in their home country of Australia, but will be headed to Los Angeles in July to train on the other side of the Pacific Ocean prior to their assault on the English Channel. They will be holding clinics and giving speeches in Los Angeles around July 14th as guests of the LA Tri Club.

Either way, it is a long way.