Australia Launches Its Own Triple Crown 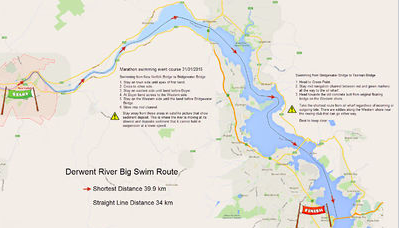 Australia Launches Its Own Triple Crown

“With marathon swimming booming in Australia, the time has arrived to have Australia’s own Triple Crown,” announced Chris Guesdon, the former chairman of the International Marathon Swimming Hall of Fame and Sue Guesdon, an honoree in the International Marathon Swimming Hall of Fame. “The Triple Crown will be achieved by the successful completion of the three established marathon swims in race or solo around the country.

The Triple Crown is in not an annual event. It can be completed at any time in a swimmer’s career. This formula is similar to other multiple swim challenges in other parts of the world. This Australian Triple Crown Series includes an ocean swim, a channel swim and a river swim giving a challenging variation for swimmers, coaches and pilots.

With thousands of open water swimmers taking on a multitude of events in this country, either as solo or in races, the time is right to have a series that is meaningful for marathon swimmers to challenge.

Since the removal of the 25 km championship from Swimming Australia’s competition program, marathon swimmers have ventured to other events in Australia and overseas to swim in many famous events. Some of these swims are included in other international Triple Crowns series of marathon swims, and in the Oceans Seven and the MSF’s Toughest 13.

An example of the many successful marathon swimmers in Australia is that 26 Australians completed the English Channel in 2019 – the Blue Ribbon of marathon swims. Those swimmers are only the tip of the iceberg in the numbers preparing to swim marathons.”

To claim Australian Triple Crown status, the claimant must provide the results of each of the events in the series showing the course was completed. In the event of completing any of the swims as a solo swim, claimants must provide the swimmers log compiled by an independent observer.

The three courses for Australia’s Triple Crown of marathon swimming are: