Chris Guesdon and Gary Toner announced Graeme Carroll as a member of the inaugural Class of 2020 in the Australian Marathon Swimming Hall of Fame. 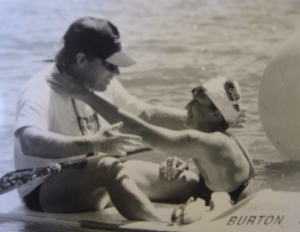 They explained, “We introduce coach and contributor Graeme Carroll. In 1986, he became the Head Swim Coach at Warringah Aquatic Centre in Sydney and was there for 20 years. At Warringah, Graeme coached numerous Australian champions and international representatives in all aquatic sports.

Graeme’s first open water position was as a handler for a friend’s daughter Perri-lee Gammie at Manly Dam in the 1984 Australian Open Water Swimming Championships 25 km who won the event in a come-from-behind swim.

At the 1991 FINA World Championships, he was coaching a German pool swimmer Svenja Schlicht and was able to witness the open water 25 km on the Swan River where Shelley Taylor-Smith placed first and David O’Brien placed third were competing for Australia. 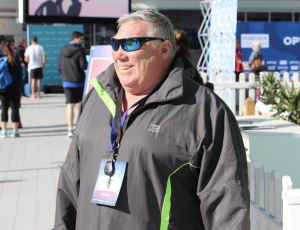 In 1992, Graeme began coaching 1991 25 km FINA world champion Shelley Taylor-Smith after her move to Sydney to gain greater exposure for herself and marathon swimming. Our first race together was the final of the FINA World Series Marathon Swimming on Sydney Harbour, my role was to track the course for the race where both male and females raced together. Shelley overtook David in the last 2 km to win the 28 km to become the first woman in history to win a World Marathon Swimming Series outright. This event win changed the races from an all-in event to separate male – female series. 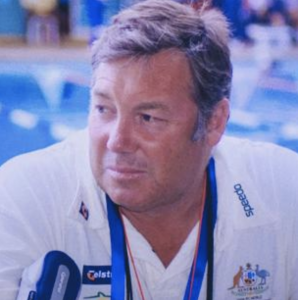 Bronwen Whitehead, now a international lawyer, won numerous Australian championship medals from 5 km up to 25 km, and won gold at the 5 km Oceania Swimming Championships, in the 1997 Pan Pacific Swimming Championships, she swam in the 5 km and 25 km picking up 2 silvers and a bronze medal, then in 1999 at the the Perth FINA World Championships, she finished 5th in 5 km. Bronwen also swam in two Rottnest Channel Swim, the second time she won and set a women’s record for the race. In her final marathon swim, she won the women’s division of the Manhattan Island Marathon Swim finishing second 10 seconds behind the winner.

Graeme coached and handled for Shelley Taylor-Smith internationally where she won the Italian Marathon Series, the FINA World Cup in Canada, and the pre worlds race in Terracina, Italy where she was the 25 km winner in 1993. In Argentina, Shelley won the 57 km Santa Fe-Coronda and the 88 km Hernandarias-Parana River marathon, and helped plan two of Shelley’s final swims of Manhattan Island Marathon Swim.”

Amazon Should Not Sell Shark Souvenirs