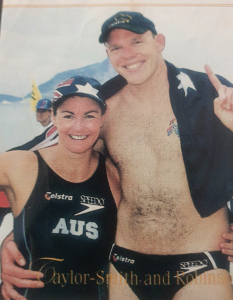 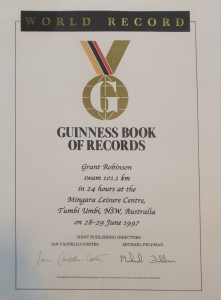 Chris Guesdon and Gary Toner announced Grant Robinson as a member of the inaugural Class of 2020 in the Australian Marathon Swimming Hall of Fame.

They explained, “Grant Robinson was a prominent premiere open water and marathon swimmer from 1996 through to 1999 in Australia and on the world stage. In 1996, Grant appeared on the scene as a relatively unknown open water swimmer.

He shocked the world by winning the 25 km FINA World Cup in Evian, France and gold for the Australian team continuing the legacy from 1991 and 1994 FINA World Championships.

Grant was coached by Gary and Suzy Toner who have produced many open water swimmers on the Australian and international stage. Grant is Australia Swimming representative no 490. He then went on to be a force on the international open water marathon scene, swimming many events and setting race records, raising the standards and speed of the events.

Grant went on to set and still holds the marathon swimming record for the most distance swum in 24 hours in a 50 meter pool as ratified by the Guinness Book of Records of 101.1 km.

Grant was the FINA Distance Swimmer of the Year in 1997 and the 3-time Australian Male Open Water Swimmer of the Year. Grant was a great teammate and created a strong following in the training group that had six more swimmers follow him to represent Australia in open water swimming in 25 km events from chasing Grant in the pool and open water.”

“Plus many more events around the world and in Australia. Grant was able to win an event in every corner of the world including Australia, Europe, America, North America, South America, Asia and Africa.”

For more information about her career, visit here.