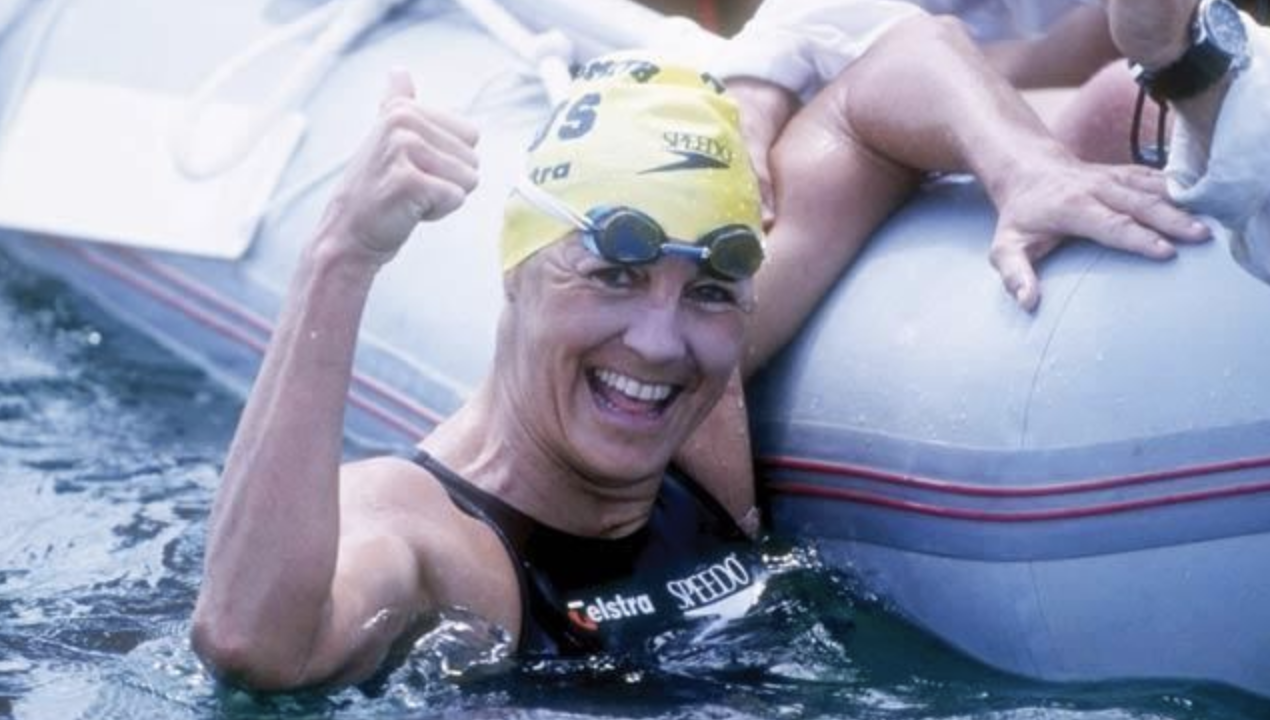 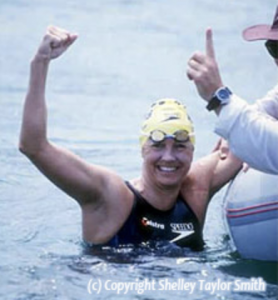 Chris Guesdon and Gary Toner announced Shelley Taylor-Smith as a member of the inaugural Class of 2020 in the Australian Marathon Swimming Hall of Fame.

They explained, “Our next inductee into the Australian Marathons Swimming Hall of fame is Shelley Taylor-Smith. Shelley is Australian representative swimmer number 406 for representing Australia at the 1991 FINA World Swimming Championships in Perth in the 25 km. Shelley claimed gold in this event to become the world champion. Shelly went on to win many events around the world in addition to being an author, a coach, a motivational speaker, a FINA representative (FINA Athletes Committee and the Technical Open Water Swimming Committee), and a handler for open water swimming.

Shelley Taylor-Smith for seven consecutive years, she was the women’s World No.1 Ranked Marathon Swimming Champion from 1988 to 1995.

Shelley’s greatest personal achievement is not a title or an award; rather, as a result of achieving the IMSA World Series 1991 Marathon Swimming World No.1 Ranking for both men & women; in January 1992 the IMSA created separate rankings and equal prize money for both genders… and that is Shelley’s global legacy for women in sport.

In her capacity as the FINA TOWSC Honorary Secretary between 2000 and 2009, she served as administrator, coordinator, technical officer and delegate at FINA Marathon Swimming World Cups from 2000 to 2013 in Italy, UAE, Canada, USA, Indonesia and Australia. She coordinate the FINA Open Water Swimming World Championships in 2000, 2002, 2004, 2006 and 2010, the FINA World Swimming Championships in 2001, 2003, 2005, 2007, 2009, trained technical officials for FINA World Cups in Canada and USA, trained the technical officials for Marathon 10 km event for the 2008 Beijing, 2012 London and 2016 Rio Olympic Games, coordinated the inaugural 10 km Marathon Swim event in Beijing Olympic Games 2008 with the Beijing Olympic Organizing Committee 2008 and become first female Chief referee at FINA World Championships in Roberval, Canada in 2010, Shanghai 2011 and Barcelona 2013. At London Olympic Games 2012 first female referee in Marathon Swimming 10 km event.”

Taylor-Smith explains her career, “Of course, my proudest moment will always remain my most memorable; being the inclusion of the 10 km marathon swim event into the Olympic Games in Beijing 2008.

My greatest personal achievement is not a title or an award; rather, as a result of achieving the IMSA World Series 1991 Marathon Swimming World No.1 Ranking for both men & women; in January 1992 the IMSA (sport’s governing body) created separate rankings and equal prize money for both genders.”

She is currently an internationally accredited open water swimming coach in Perth, Australia. Her Team STS squad and Open Water Swimming Mastery launched in 2011 by accident when gold medalist Bill Kirby said, “Help me save my marriage by coaching the Rotto Solo squad.” Ten years on, she has coached 379 Rottnest Channel solo successors with a 97.55% success rate. Shelley’s mission to turn every human being into an open water soul, sea swimming for their mental health and overall well-being.

She is an author of a book that details Training and Mental Preparation for Swimming a Marathon; a passionate coach, and has a ferry named after her in Perth.

For her career summaries, visit here and here.