Australians Go 1-2 Twice At The End Of The Day 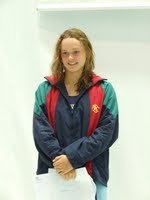 Apia, one of the last points on Earth to enjoy any given day due to its positioning near the International Date Line, is a typically beautiful island with crystal-blue water in the middle of the Pacific Ocean.

Jarrod, who paced himself with Codey Grimsey, just outsprinted his Queenslander rival with 50 meters from the finish. Phillip Ryan from Auckland finished third in 58:18. “Codey beat me at Australian Championship Trials so I was expecting him to set the pace which he did. I was just lucky to hang on. I thought I lost him for a bit, but I was able to get back in front and win the race,” recalled Jarrod who will have a full week of swimming since he is also entered in the 50, 100, 200 and 1500-meter freestyles and the 200 and 400 individual medleys. “I’m pretty confident when it comes to my speed. I can change pace really well and I knew that if I could sit behind him I would then be able to pull out in the last 100 meters. My speed at the end showed that I’ve still got it.”

“I’m really happy with that and wasn’t expecting to win at all. I just wanted to go out there and challenge myself and I think I did that which was good,” said Belinda who headed out with the men in a dual start. “We went off with the boys which meant we got to swim with them a lot of the way which really pushed me as well. It gave me a challenge, I was swimming behind one of the guys and it gave me extra motivation to go when I saw him get ahead.”