Australians Rule Waikiki For Third Year In A Row 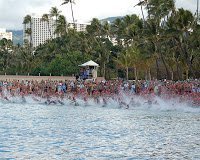 The Australians have always done well in the surf and tropical blue of the Waikiki Roughwater Swim, but none as well as Luane Rowe who won the women’s race as expected – her third victory in three years.

Her male counterpart, Travis Nederpelt of Perth, finished ahead of Americans Chip Peterson and Alex Meyer – another three-peat on the male Aussie side.

Luana from Sydney won comfortably over a minute over runner-up Melissa Myers and was the only women who finished in the top 25 (see below).

“It‘s hard not to get distracted by the fish and the turtles when you’re swimming, it’s gorgeous. It’s getting more and more competitive as people hear about this great swim. I know that next year some of the American Olympic swimmers are coming. It’s going to get a lot more popular and the level of competition is going to rise. It’s going to get tougher and tougher.”

It was a fast race all around with only 2 of a total of 965 swimmers who did not finish the 2.4-mile swim.

Travis took the lead late in the race. “It was a last-minute decision for me to swim. Generally speaking, I’m not an open water swimmer, I’m more of a pool swimmer. But I wanted to mix it up and see how I’d go. About 800 meters from the end I got the lead. All you can do is put yourself in the mix and see what happens. I think it turned out pretty well.”