An Average Swim By An Extraordinary Swimmer 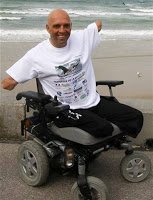 From one perspective, Philippe Croizon is average.

News reports from around the world heralded his swim across the English Channel when he finished in 13:30, almost exactly the average time based on the thousands of successful swims done since 1875. But from another perspective, the 42-year-old Frenchman is anything but average.

His arms and legs were amputated due to an industrial accident and he swam across the English Channel using leg prostheses with fins attached. “I did it, I’m happy, I’m so happy, I can’t believe it, it’s crazy,” he told France-Info radio.

Crazy, yes. Extraordinary, yes. But that is the world of open water swimming.

Philippe lost his arms and legs after suffering an electric shock when a ladder he was working on touched a power line. But his dreams did not end with his amputation. His book, J’ai decide de vivre (I decided to live), is typical of his inner drive.

May we all similarly have such a desire and zest for life.

Photos by Michel Spingler of the Associated Press shows Philippe with his snorkel and wetsuit kicking and stroking his way across the English Channel.