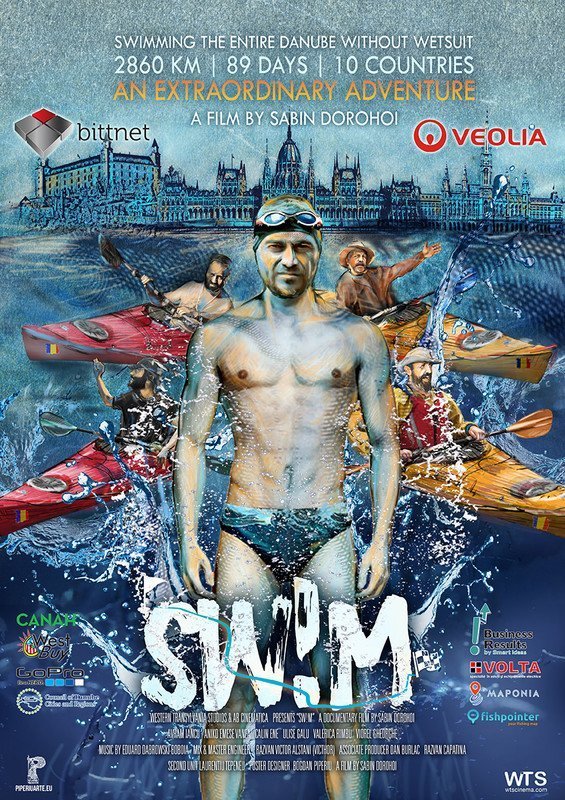 SW!M can be seen here as part of the Kendal Mountain Festival.

Iancu swam a total of 2,860 km along the Danube River from Donaueschingen in the Black Forest in Germany to Sulina on the Black Sea in Romania, crossing ten countries and passing four capital cities. The 41-year-old Romanian liberian swam through dams, whirlpools, eddies and unpredictable weather accompanied by two kayakers.

Iancu was nominated for the 2016 World Open Water Swimming Man of the Year. His nomination read:

“Avram Iancu wanted to do something very special – he wanted to swim 2,860 km across 10 different European nations along the entire Danube River and four capital cities.


He not only pushed himself longer than he ever imagined over the course of 89 days, but he also faced and overcame rougher and colder conditions than he ever thought possible. More importantly, he touched thousands of people who were inspired by his engaging personality, his humble manner, his visible strength of character, and the sheer physicality of his feat. The 41-year-old librarian graciously met local politicians and students; he spoke with celebrities and environmentalists; he swam with local people. For his 4-month promotion and celebration of the sport, for his minimalistic approach to stage swimming as he lived off the land without a large entourage or crew, for his personable approach to serving as a swimming ambassador throughout 11 European countries, Avram Iancu is a worthy nominee for the 2016 World Open Water Swimming Man of the Year.” Highlights from Week 5 of his stage swim down the Danube is here:

Iancu also gave a TED Talk about ‘Faith in Dreams’ at the TEDxBucharest on February 19th 2019: