Catalina Channel Swimming Back In The Day 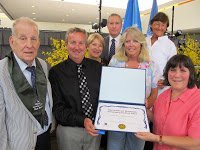 Catalina Channel Swimming Back In The Day

Courtesy of WOWSA, Huntington Beach, California. Back in 1984 and 1989, Penny Dean and John York, along with a number of other marathon swimmers under the auspices of the Catalina Channel Swimming Federation, organized a USA Long Distance International Championships, a Cross Catalina Channel race, together with USA Swimming.

The 1984 event was the first race across the Catalina Channel since the Wrigley Ocean Marathon in 1927. Dean, Siga Albrecht and Syndi Goldenson were the American coaches, while sailors from Marina del Rey unselfishly donated their time and boats.

York won the Catalina Island-to-mainland race in 8 hours 54 minutes under challenging conditions, finishing on Cabrillo Beach, a few miles further than the traditional landing point near the Terranea Resort in Rancho Palos Verdes on the San Pedro Peninsula.

The night before the race all the swimmers stayed at the Coast Guard Station on Catalina Island with the volunteers, officials and administrators staying overnight in tents on the island. “One of the highlights of the pre-race activities was a buffalo chip throwing contest for distance won by England’s David Morgan,” recalls Coach Dean.

The race started at the Isthmus on Catalina Island immediately prior to dawn by the sheriff discharging his magnum pistol into the air. “The weather and ocean conditions were ideal,” recalled Dale Petranech, the USA Swimming representative and team manager. “There were a few watch-outs for “SeaWeed” cautions (i.e., shark sightings), but we didn’t want to panic the swimmers.

I recall the Egyptian coach would blow his whistle to encourage his swimmer every time he took a breath. The rest of the entourage found this very annoying, but it stopped after American John York passed the Egyptian swimmer. The whistling stopped, but from what we could see, any support (e.g., feeding) was also stopped for the rest of the race.”

Prior to the cross-channel race, there was a 15 km race from Huntington Beach to Seal Beach won by Tom Fristoe in 3 hours 9 minutes, followed by Tom Hilgen, Nancy North and Dr. Jaroslav Novak.

We swam during the day to make it easier and finished at Cabrillo Beach, making it a 25.5-mile crossing. This made the times even more impressive
.”

On August 11th 1989, the USA National Open Water Swim Team again attempt a Catalina Channel relay and set a world record of 7 hours 2 minutes. Coached by Penny Dean, John York and Sid Cassidy, their leadership could be no better. Dean recalls that blazing fast team, “The relay was called the US National Team 1989. The competition was the old record and the clock. We wanted to break seven hours. Conditions were flat and a little wind. We finished at Doctor’s Cove, also known as the Boy Scout camp on the Island. Petranech was the head of USA Swimming’s open water swimming program and I was the head national coach 1979 through 1991. Eddie Sinnot of SMU went along to watch his college swimmer Chad Hundeby. Chad went sixth because he was afraid of the dark and sharks. This relay cured him of this fear.“

Burton (now Reeder), one of the world’s fastest pro marathon swimmers of that era, also recalled, “Chad went after me and the escort boat was keeping up with him. I got left in the dust. I swam as fast as I could and had to swim faster to try and catch the darn boat. Someone finally noticed and the boat waited up for me.”

Sid Cassidy recalls those halycon days, “We started in the dark from a rocky beach not far from the lighthouse with the paddlers and swimmer wearing the green glow sticks. Jay Wilkerson was the lead-off swimmer followed by Jim McConica because it was still supposed to be dark. It was fairly cool and there were large swells early, becoming choppier later. There was considerable discussion on where best to land in Catalina. We came quickly upon it because there was a pretty healthy marine layer all morning. We steered Jay alongside the island – swimming parallel to a very rocky shoreline looking for a clearing.

There was a wild boar stirring in the brush, eventually making himself visible and looking out to our entourage with great curiosity as if to say, “What the heck are those creatures doing out in the water?” We had minimal electronic equipment [in those days] so we were not totally sure exactly where we were. The land that we first we came upon was certainly inaccessible; there was significant trepidation about sending Jay into that very rocky shoreline. Eventually the hour passed and we got Jim in for the sprint to the beach. Undaunted, he headed him towards a fairly desolate clearing that we had spotted from the boat. We joyously dubbed it ‘McConica Cove‘ in his honor. It was a fantastic experience.”

“We has Gatorade on board and had two paddlers who switched every two hours, set up by Dottie York,” explained Coach Dean about the logistics. “We had three official timers using watches. For relay exchanges, the new swimmer swam up from behind and tapped the other swimmer on the foot. That swimmer would then race over to the boat and climb aboard as the paddlers guided the new swimmer. The boat would switch out of neutral and gradually catch up to the new swimmer.” 25.5 miles in 7 hours 2 minutes. It was, indeed, a blazing fast relay back in the day.

The post-race analyses and recommendations for advancing the sport were formally submitted to then FINA President Bob Helmick. This eventually led to the sport of open water swimming being added as the fifth discipline by FINA.