Back to the Beach For 10 Years 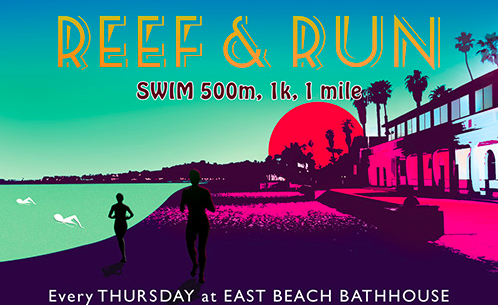 The Reef & Run Series series in Santa Barbara, California returns for its 10th season in 2018.

The theme is Back to the Beach for the series that begins on Thursday, June 7th and continues each Thursday until August 23rd. The events start every Thursday at 6:30 pm at the Cabrillo Bathhouse at East Beach. The Boat to Beach race, for which participants must qualify, will be held on August 30th. The season pass covers the 12 weekly events, but not the Boat to Beach race.

Early Bird Season Passes are available for US$100 to enjoy the races and post-race live bands and after-party food. Walk-up entry fees for each individual event during the season remains $15 per night.

The proceeds donated in 2017 bring the total to US$10,200 given to the local Junior Lifeguards program in the last six years and US$9,000 to the Nick Johnson Memorial Fund in the last four years.