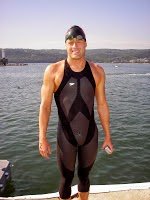 While running a high-tech start-up business in San Francisco and dealing with the stress of creating and marketing new products and services, Barton was somehow able to travel around the world to compete on the marathon swimming professional circuit. The Daily News of Open Water Swimming caught up with him during the off-season.

Daily News of Open Water Swimming: What prompted you to participate on the pro circuit?

Barton Wells: It was basically the advice of Lisa Hazen, a former pro circuit swimmer [who competed in FINA Open Water Swimming Grand Prix races between 1994 and 1997], now a masters swimmer, who suggested that Heidi George should check out the [professional] open water circuit.

Heidi was winning masters open water races by huge amounts (she won the USMS 1-mile national championships [in central California], without tapering or shaving, and in a workout suit, by almost 1-1/2 minutes), she was not restricted by school, had a flexible job, and it seemed like it could be a fit. I was also winning masters races and also appreciated a greater challenge, also did not have school or an inflexible job to restrict myself.

Daily News of Open Water Swimming: Why did you pick the races that you entered?

Barton Wells: We just picked what races were left on the FINA World Cup professional circuit.

Daily News of Open Water Swimming: What did you learn about swimming against the world’s fastest marathon swimmers?

Barton Wells: We learned how much less we train than all of the other swimmers. We train about half as much. We also leaned how rough international open water swimming is, where getting elbowed in the nose, kicked in the face, hit in the head, feet pulled on, and goggles ripped of are all common. Obviously we saw firsthand how fast they are.

Daily News of Open Water Swimming: Did anything funny happen to you on the circuit?

Barton Wells: Swimming in brown water in Shantou [China], then swimming in a blue pool in Shantou that we found out was blue only because they put blue dye in the water. I went off course a few times – funny for Heidi and the coaches in the feeding boat, not so funny for me. Heidi got stage 2 hypothermia in the FINA Copenhagen race.

Daily News of Open Water Swimming: Did you have any problems with your travel to all these countries?

Barton Wells: Well, visas cost more money than we expected. We also got sick a lot – sometimes from the food, sometimes from the water, and sometimes we don’t know. A lot of the swimmers, maybe most, got sick at some point, and we know one of the Brazilians got seriously ill. That is a risk of travel and a risk of open water swimming in some of the world’s waterways. We also had trouble finding bottled water a lot of the time – that is a constant battle.

Daily News of Open Water Swimming: Was anyone on the circuit particularly helpful to you during the competitions or travels?

Barton Wells: Petar Stoychev from Bulgaria was probably the most helpful person of all. He really helped us out in a lot of areas. Brian Ryckeman from Belgium and Thomas Lurz from Germany also helped us out at times. Also, the coach from Croatia, Slaven Šitić, was very helpful to us giving us advice, and a lot of coaches helped us out with feeding since we didn’t have a coach with us. And, of course, Lindsay Mintenko with USA Swimming was helpful with all of our travels.

Daily News of Open Water Swimming: How does the pro circuit differ from open water swims in the US?

Barton Wells: Most of our experience is with masters open water swimming in the U.S, so obviously it was much faster than that, much more competitive, much rougher, and much longer. It was pretty similar to the USA Swimming World Championships Open Water Swimming Trials, but a lot rougher. You tend to get a lot more scratches and bruises on the World Cup circuit. They also tend to put you in water that isn’t always clean or isn’t always so safe (read: sharks and/or jellyfish).

Daily News of Open Water Swimming: If you were ten years younger, how would you approach the pro circuit?

Barton Wells: If we were ten years younger, we probably would not have swum as many races, if any. I think a large part of doing the circuit was really that it was a good time in our lives to see the world. Also, ten years ago we would have been doing it on our own, which would have been quite lonely. Also, neither of us had the coaching or the training opportunities ten years ago to put us in a position to do these events. Our coach, Jose Bonpua at Los Altos Mountain View Aquatics, caters our workouts to help us with our specific goals. Also, neither of us had a career that would have afforded us the opportunity to go to these races a decade ago.

His passion for the sport, his successful lifestyle balance between work and professional swimming, and the sacrifices he is willing to make for aquatic adventures around the world are something to behold.