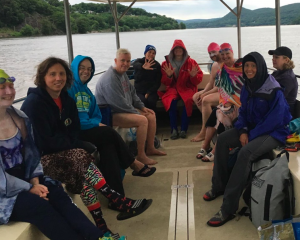 Courtesy of Rondi Davies, Hudson River, New York Open Water. Stage 5 – known as The Beast – of the 8 Bridges Hudson River Swim lived up to its name.  Usually the toughest stage of the 193 km event, conditions during The Beast were overcast and rainy with cooler air temperatures of 57-60°F throughout today. Downpours arrived soon after the start of the 31.8 km stage as swimmers slogged against the flood current. Over halfway into the swim, in the vast expanse of Haverstraw Bay, the rain stopped and the ebb arrived, but a westerly wind didn’t allow swimmers to relax and coast to the bridge. As a result and in contrast to previous day, no records were set today along the swim that still wows its participants with beautiful scenery amid the widest sections of the Hudson River. But all were inspired by the grit and determination of the swimmers and the endurance of the kayakers who sat in cold, wet boats all day. John Batchelder and Andrew Wells have swum a cumulative time of 29 hours 31 minutes and 31 hours 54 minutes, respectively, over the first 5 stages. The Beast Results: Copyright @ 2008-2019 by World Open Water Swimming Association