Battle Around Jersey For Holidays For Heroes

The race is on. In 2009 a team comprising of severely wounded British Servicemen and women from both Afghanistan, Iraq and other theatres of unpleasantness formed a team called Battle Back. They swum a superb English Channel crossing and were awarded the Jersey Long Distance Swimming Club trophy for ‘against all odds’ as a result.

Battle Back was given the opportunity to attempt a 41-mile Round Jersey relay race. Word got around and 3 other British Services teams showed interest. 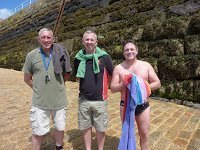 The military might plan to assemble in Jersey at the end of August for the competition and will be welcomed by the Islands Lieutenant Governor General Sir John McColl, Her Majesty Queen Elizabeth II’s representative on Jersey.

Weather permitting, a small armada will assemble at the start and will take on ‘The Gutters’ with hours of dodging rocks along Jersey’s south coast before catching the run of tide around the scenic coast line.

The event will raise funds for a href=”http://www.hols4heroesjersey.org.je”target=”_blank”>Holidays For Heroes (Jersey), a local charity which provides holidays for injured servicemen and women and their families. For more information, visit here.


Tags: Battle Back, Round Jersey