Battle For The Bodies – The Wetsuit Wars In The Open Water 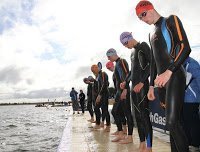 With nearly 20,000 swimmers of all ages, abilities and backgrounds doing the annual Great Swim Series, as well as literally millions of others doing open water swims and triathlons around the world, from New Zealand to Iceland, the business opportunities for wetsuit manufacturers is heating up.

A little company with 17 employees from a small corner of the globe far away from the traditional aquatic capitals of the world, blueseventy, has long carved out a nice niche for itself. And its niche may transform to something bigger since blueseventy recently replaced AquaSphere as the official equipment partner for the massive Great Swim Series.

Great Swim Series visionary Colin Hill, himself a proven English Channel swimmer (i.e., no wetsuit), understands the importance and value of the open water world being inclusive of wetsuit-clad swimmers. Newcomers, triathletes and others who simply do not want to swim in cold water but want to enjoy mass participation open water events are the lifeblood of Great Swim Series and New Zealand Ocean Swim Series – and many other swims around the world. The availability of reasonably priced wetsuits go hand-in-hand with the growth of these events. As Colin says, “blueseventy understands the open water community and their products reflect their heritage as a long-term player within open water swimming and triathlon.”

blueseventy will supply the official wetsuits, goggles and all swim attire for the Great Swim Series as well as provide wetsuit rentals at the each of the events. A few years ago, blueseventy became a sponsor of the FINA 10KM Marathon Swimming World Cup, but sponsorship of the significantly larger and much more visible Great Swim Series seems to make more sense. Dean Jackson of blueseventy sums up his perspective, “We have seen the Great Swim Series grow alongside the other great mass participation swims of the world. Now is the perfect time for blueseventy to align with this exciting new mass participation sport and Nova, who we regard as one of the worlds finest mass participation sporting event organisers. The blueseventy allows us to meet face-to-face with a large number of enthusiasts for the water. They are a group who are passionate about the challenge of swimming in some great open water venues. If we can help make their experience a little more enjoyable by product and training, then we have a achieved our goals.”

These kinds of services to the sport and for its enthusiasts are additional building blocks for continued growth in the open water world.